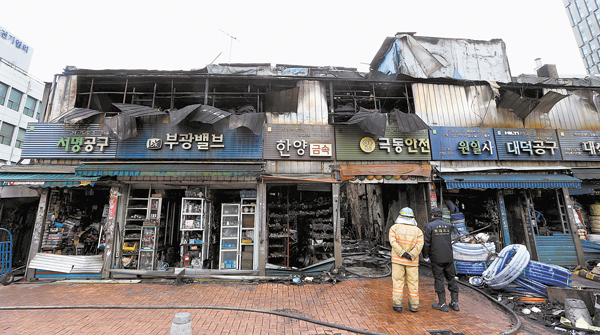 Two elderly women perished in a fire that broke out Monday in a building widely referred to in Seoul as the Overseas Chinese Building, officials said.

The blaze delivered extensive damage, collapsing about a third of the residence’s west side and resulting in 19 of the building’s senior tenants to be evacuated and relocated to a nearby sauna. Those facilities are commonly used by Koreans as inexpensive alternatives to guesthouses or hotels.

One of the casualties, surnamed Jeon, had been living in the Jung District residence for more than 40 years, since the 1970s.

For those familiar with the building, the fire came as no surprise. Even before the incident, the structure stood out, a decrepit edifice in the middle of a sea of development. Unlike modern structures that are constructed with steel frames and sturdy materials, the Overseas Chinese Building is old and made of wood, making it highly susceptible to catastrophe and particularly defenseless against fire.

In 2003, Jung District gave the Overseas Chinese Building a “D” rating, flagging it as a dangerous and hazardous facility. More than a decade on, the facility has fared no better.

“The district office and fire station placed many fire extinguishers in the building,” said Jung Kwang-su, who has lived in the building for two generations now. “However, most of the people living here use coal to heat their homes, and they collect papers [and other recyclable items], so it is extremely vulnerable to fire.”

The three-story structure, with a floor area spanning a little more than 1,000 square meters (1,195 square yards), has 31 hardware shops on the first floor. On the second and third floors are 42 small makeshift rooms, plastered together with wooden boards and bricks.

Those levels accommodate 34 Korean tenants, most of whom make a living running street stalls or collecting papers.

But contrary to the building’s name, no Chinese residents currently live there. And historical and diplomatic complications mean that the residence has essentially remained neglected and devoid of government oversight, making the status of its tenants less than definitive.

The Overseas Chinese Building was constructed in Seoul during the Japanese colonial era by what is now the Chinese Residents Association (CRA).

According to district office documents, the association came into possession of the land in Supyo-dong, where the structure is located, after exchanging with the Japanese the property it used to hold in Sejong-ro.

In 1941, the CRA registered the land in the name of Republic of China (Taiwan), as foreigners at the time could not individually register property in Korea.

But after the division of Taiwan and China in 1949, the building stood for decades as an unregistered, vaguely illegal site.

During the 1970s and 1980s, Koreans from the countryside moved into the area, though none of the inhabitants signed any sort of formal contract for their units, instead paying the association an agreed-upon sum, without a proper lease.

Once Korea established diplomatic relations with China in August 1992, and ties with Taiwan were severed, the building was registered to the Chinese Embassy.

However, due to diplomatic sensitivities, the embassy never claimed it, leaving jurisdiction over the structure with the CRA, which continues to hold rights over the surrounding land.

Around this time, the building’s Chinese residents also vacated the premises.

Still, because of the complex nature of the relationship among Korea, China and Taiwan, the structure has essentially been left alone, and legal ramifications for the residents of the building are essentially nonexistent.

“Since there are diplomatic issues surrounding this area, we couldn’t consider reconstruction [or renovations] even though we knew about the fire hazards [the building] presented,” a Jung District official acknowledged.

According to the district’s records, the land is currently registered as a park.

However, this legal gray area also means that those affected by the fire are ineligible to receive compensation or a moving allowance.

By civil law, when a person lives in a place for more than 20 years without a formal contract or lease, the resident can make a claim for ownership.

Though, the CRA has argued that it owns the rights to the building because it receives monthly payments from the businesses on the ground level, insisting that only a few residents occupy the place illegally.

Jung District, meanwhile, sent an official document to the association prohibiting the use of the building, citing safety reasons.