A graceful ‘adios’ from ‘Queen’ Yu-na in Sochi

A graceful ‘adios’ from ‘Queen’ Yu-na in Sochi 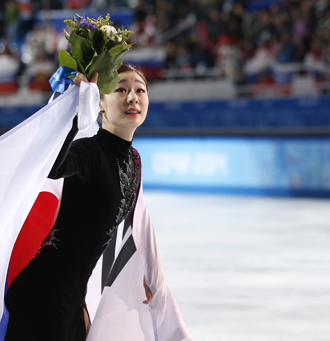 Before the Winter Olympics in Sochi began, Korea’s figure skating darling Kim Yu-na said that her biggest goal was not to win another gold medal but to wrap up her career by performing her programs well. But after a tough couple of weeks in Sochi for the Korean athletes, expectations grew for Kim. Korea was hungry for good news, and few things could surpass Kim becoming just the third woman ever to win back-to-back golds in figure skating.

Just like in the 2010 Vancouver Games, Kim performed a flawless free program. Her spins, footwork and jumps were precise and elegant. It looked to most people at home like the 23-year-old skater would take the gold.

Sadly, it was not to be. Skating to “Adios nonino,” Kim only received 144.19 points for her free program, finishing the final competition of her career in second place with a total score of 219.11.

As she read her scores, Kim seemed to have so many emotions crossing through her mind, although she looked like she was trying to stay calm. She thanked the audience who filled the venue, but she burst into tears when her coach, Ryu Jong-hyun, the man who introduced her to figure skating when she was 7 years old, gave her a warm hug and whispered, “Yu-na, it’s all over now.”

Kim looked a little disappointed when she saw the score was lower than she expected - maybe lower than what everyone expected, save the judges. But she quickly covered up any sadness with a beautiful smile and waved to the fans who were cheering for her at the Iceberg Skating Palace.

Just like that, Kim wrapped up her 17-year career.

Russia’s Adelina Sotnikova won the gold with a total of 224.59 points, by far her best ever score, and Carolina Kostner of Italy took bronze with 216.73 points.

Media outlets worldwide, including USA Today, ESPN and NBC, questioned the outcome by the nine-judge panel, which included Alla Shekhovtseva, the wife of the former president of the Russian Skating Federation, and Yuri Balkov of Ukraine, who was suspended for a year for trying to fix the ice dancing competition at the 1998 Nagano Olympics.

“I actually didn’t care about the score because it isn’t something that I can control,” Kim told the Korean media in a post-skate interview. “I feel so relieved now, and I feel I’ve been rewarded for the efforts that I have put in over the past years because I finished my two programs without making any mistakes.”

Korean television commentators who broadcast Kim’s swan song and fans who stayed awake late into the night to witness their favorite’s final victory could not hide their disappointment. But soon after they saw Kim smiling on the podium, the Internet was overwhelmed with messages of support for her performance and her amazing career.

“Yu-na, you’re still the queen and always will be,” said one.

“Thank you for being with us Yu-na, we are proud of you!” was another message.

Some fans even started raising funds to present Kim with a gold medal to thank her for her contributions to Korean figure skating.

But there were also angry fans who bombarded the International Skating Union’s Facebook page. 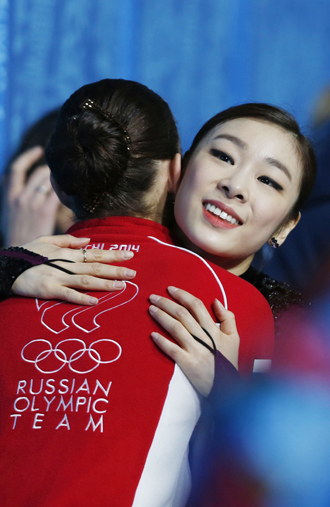 While Yu-na apparently has accepted Thursday’s outcome, media outlets, analysts and even some of Kim’s competitors have not, sounding off on the results and the judging system.

Germany’s Katarina Witt, who was the last woman to win back-to-back Olympic titles, in 1984 in Sarajevo and in 1988 in Calgary, said she was upset with Kim’s loss. “I am stunned by this result, I don’t understand the scoring,” Witt said.

The judges saw Kim attempt only six triple jumps while Sotnikova did seven, but that didn’t explain why Kostner of Italy, who also made seven triple jumps, was given 7.34 points fewer than Sotnikova, noted Reuters.

“I can’t understand how Sotnikova earned the highest score,” said Bang Sang-a, a Korean SBS network commentator. “Among the top three, she is the only one who made a mistake on a jump. The Korea Skating Union needs to consider submitting a petition to the ISU to re-check the scoring.”

American skater Ashley Wagner, who finished in seventh place, said in an interview with Yahoo Sports, “People don’t want to watch a sport where you see people fall down and somehow score above someone who goes clean. It is confusing .?.?. To be completely honest, this sport needs fans and needs people who want to watch it. People do not want to watch a sport where they see someone skate lights out and they can’t depend on that person to be the one who pulls through. People need to be held accountable.”

But Elvis Stojko of Canada, who has won two silver medals in the Olympics, said in an interview with the New York Times that the judges were fair. “Kim didn’t have enough technical ammunition,” he said.

Regarding the scores, Sotnikova said, “Any questions about the scores are for the judges, not for me. I only did my job.”

But the Sochi champion’s actions at the press conference after the flower ceremony also earned some criticism. In general, all three medal winners stay at the press conference until everyone is finished or ask to be excused when they have to leave early. But Sotnikova just grabbed her national flag from the table and left the conference room while Kim was answering a question about her retirement plans. As the conference room was predominantly filled with Russian reporters, the champion’s exit caused a big stir.

Kim paused for several seconds before continuing her answer. “I actually don’t know yet what should I do next, just like I was after the 2010 Vancouver Games, because I have been an athlete for a long time,” she said.

Sources familiar with Kim said she might try to become a member of the International Olympic Committee’s Athletes’ Commission in the future. But since only one athlete can represent each nation, she would have to wait until after 2016, when the term of Moon Dae-sung, a 2004 Athens Olympic gold medalist in Taekwondo, ends.