Consumers are less willing to spend

Consumers are less willing to spend 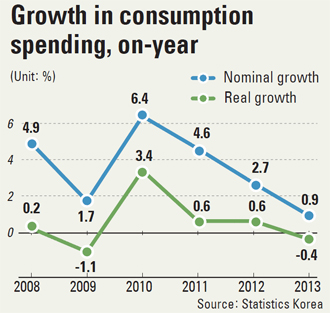 Due to tiny wage increases, consumers tightened their purse strings even more last year, indicating that the domestic market is still in a sluggish state despite government efforts to boost consumption.

According to a report released by Statistics Korea yesterday, the average propensity to consume was 73.4 percent in 2013, down 0.7 percentage point from a year earlier and the lowest since 2003.

Income for salaried employees inched up 2.8 percent, while wages of self-employed people rose 0.4 percent. Because of the depressed real estate market and lower housing prices, income from assets dropped 3 percent.

“The decrease in consumption may have been affected by expanded government subsidies for child care programs,” said Seo Un-joo, an official at the statistics agency.

The official added that such a contraction in consumption isn’t always only a negative sign.