Small importers will get a big boost

Small importers will get a big boost

As part of efforts to bring down the prices of imported goods in Korea, the government has rolled up its sleeves to create a better business environment for small importers.

The country’s imported goods market has been largely dominated by big importers with exclusive sales rights obtained directly from overseas brands, and this has led to a phenomenon in which consumers are charged excessive amounts for the foreign products they buy.

Although the government in 1995 allowed small importers to operate their own businesses to reduce prices of imported industrial goods, barriers remained with big importers doing everything they could to hold on to their territory.

According to the JoongAng Ilbo on Thursday, the government is expected to announce measures to support small importers next month. Among them is setting up an exclusive after-sales service center for small importers and a complaint center where small importers can report unfair practices or behavior by big importers.

The measures are expected to create a better business environment for small importers, which will allow them to bring in more imported goods and sell them at cheaper prices.

Consumers have complained about the cost of imports sold by exclusive importers. According to a list of 13 import items and their import cost acquired by the JoongAng Ilbo from the Korea Customs Service, items are being sold for as much as 35 times more than the cost of their initial import. 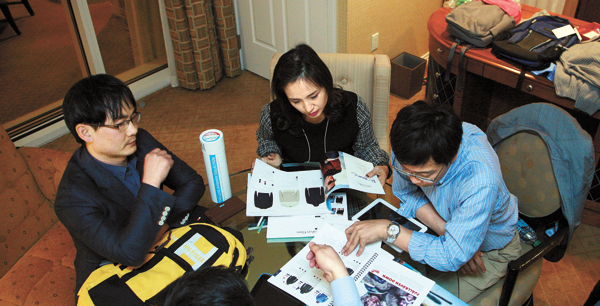 E-Mart employees meet with a supplier, not shown, in a hotel room in Las Vegas. Large importers with exclusive contract have been trying to reduce products available through small independent suppliers. By Moon Byung-joo

Amid the government’s efforts, large retailers in Korea have noticed a growing demand for cheaper imported goods among consumers and have been increasing their efforts to bring items from overseas by visiting suppliers and signing import contracts.

According to industry sources, however, it has been extremely difficult to find suppliers. Sources note that big importers with exclusive sales rights have been disrupting small importers in the industry that are trying to import similar products.

Earlier this week, a JoongAng Ilbo reporter accompanied a group of 10 employees from E-Mart, a large discount store operated by Shinsegae, who attended the world’s largest apparel exhibition called Magic Show held in Las Vegas from Tuesday to Thursday. The exhibition is also a venue for small importers to find unique items and seal deals to import them.

“Many consumers in Korea are looking for [cheap items] brought in by small importers,” said Ahn Young-mi, an E-Mart employee. “Demand has grown among consumers for the latest items.”

Ahn said she was ordered by the company to find as many new items as possible. For the first time, the company even allowed the group pay suppliers in cash.

First thing Tuesday morning, Ahn’s team browsed trendy items at the Las Vegas Convention Center and Mandalay Bay Convention Center. Their most important duty, however, was the night before when they met with three American suppliers at separate hotels. One supplier the team met on Tuesday was one of the top five on the East Coast dealing with foreign importers. 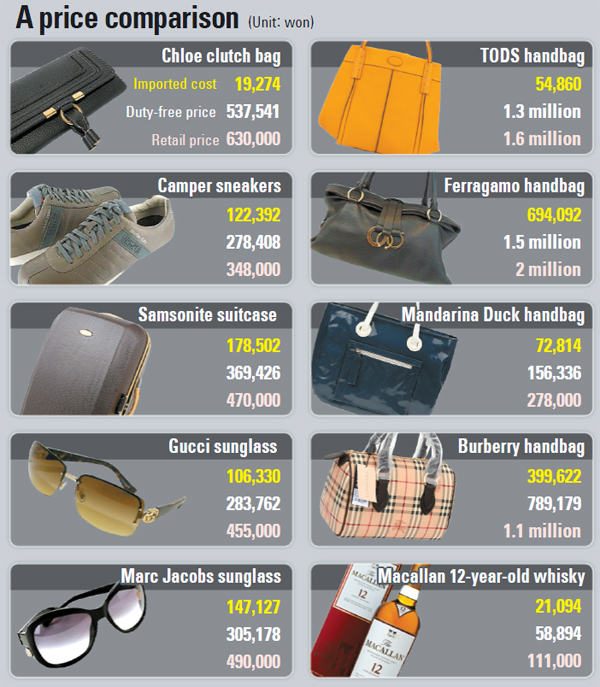 The suppliers introduced the E-Mart team to new items from Calvin Klein and Hugo Boss as the two negotiated. The focus of the negotiation was price and volume. The American supplier told the Korean team that with growing demand for products from small importers it is difficult for suppliers to secure large amounts of products from manufacturers. The meeting ended after three hours at 9 p.m.

E-Mart wasn’t the only one. Lotte Mart also attended the Magic Show and eight employees are known to have met with suppliers.

Although it takes much time, effort and money to meet suppliers and bring products to Korea, large discount stores can sell the products for as much as 60 percent less than department stores.

According to the list from the Korea Customs Service, the import cost of a Chloe purse was $18, but it costs $502 at department stores. The same item at a Chloe store is 630,000 won.

“It’s not that we take all the difference as profit, because we have to pay extra costs in labor and store management, among others,” say exclusive importers.

An exclusive importer who asked to remain anonymous added, “The actual profit importers take is 20 percent to 30 percent of the import cost for fashion brands and the amount is a little higher for cosmetics brands.”

“In general, the most ideal retail margin would be about 50 percent of the product cost,” said Kim Joo-young, a business professor at Sogang University. “The margin being 100 to 200 percent is too much.”