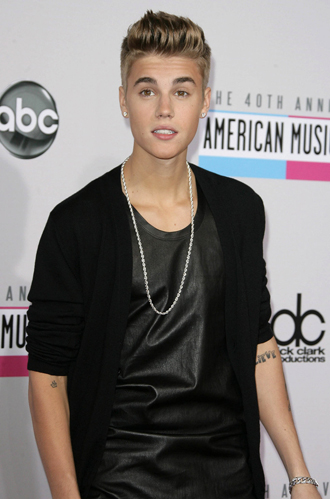 MIAMI - A Miami judge on Thursday temporarily blocked media access to any more video images of a semi-clad Justin Bieber filmed while the teenage pop singer was in police custody last month after his arrest for driving under the influence.

The police station footage included clips of Bieber giving a urine sample behind a low wall.

Miami-Dade County Judge William Altfield ordered that about 10 hours of police surveillance video not be released until he has been able to review them in his chambers.

“Do you believe that the public has the right to see Justin Bieber urinating?” the judge asked attorneys representing several large media companies seeking access to the video under Florida’s broad public records law.

“I don’t think the public has a right to see his penis,” replied Scott Ponce, an attorney for the Miami Herald and CBS.

“I believe the public has a right to see him standing behind a wall doing what we know is urinating,” he added, noting that Bieber’s urine test was part of the evidence in the DUI case.

At issue are four short clips of Bieber urinating at the police station.

If Bieber’s genitalia are visible in the videos, authorities should release the clips after blacking out his private parts, he argued.

“I find the argument to be insulting and demeaning of the court .?.?. to just fuzz out the private parts,” replied Howard Srebnick, one of Bieber’s attorneys.

Judge Altfield said he would review the video and announce his decision on March 4. He also postponed Bieber’s March 3 DUI trial until March 17.

Bieber, 19, was charged with driving under the influence, resisting arrest and using an expired licence after Miami Beach police say they caught him drag racing on Jan. 23. He has pleaded not guilty to the charges and did not attend the hearing on Thursday.

Besides a small amount of alcohol, he had marijuana and prescription medication for anxiety in his system at the time of his arrest, said the state attorney’s office.

One video showing Bieber being patted down by a Miami Beach police officer was released to the media in early February, prompting his attorneys to file a motion to prevent any more such images from being released.

“While in custody at the Miami Beach police station, the defendant was captured on videotape in various states of undress, which show intimate personal parts of the defendant’s body,” according to the motion filed this month in Miami-Dade County Court.

The motion said the Florida constitution and state law protected such images from being publicly disclosed.

Releasing video from Bieber’s brief time in custody would cause “irreparable harm”, the teen’s lawyers say.

Bieber, whose private life has taken a seemingly tumultuous turn in the past year, was also charged last week with assaulting a limousine driver in Toronto in December.