Nae Island (Naedo), a part of the city of Geoje in South Gyeongsang, is still foreign to most Koreans. Although its virtues are eclipsed by nearby Oe Island and Jisim Island, it’s the best place in the country to see camellias. Ten years from now, Nae Island may be a household name for those in pursuit of the crimson flower that signals the end of winter.

“You want to catch a whiff of spring early?” said Choi Chul-sung, head of the island’s resident’s association when the JoongAng Ilbo called to get a tour of the island.

“I guess spring is already here, there are camellias everywhere,” said the 56-year-old, who urged us to “come quickly!”

Nae Island can be seen clearly from the southernmost tip of Wahyeon-ri in Geoje. It’s about 300 meters (984 feet) off the coast and is tiny, with an area of about 256,000 square meters. As the entire island is a forest, from afar it looks like a turtle draped in green cloth.

Despite the gusts of icy wind that blew there last week, it was clear to see that spring had come early to the isle.

Locals have always relied on the sighting of camellias as signifying the change of seasons. Once camellias start to blossom, it means “the winter is nearly over.” And when the flowers fall to the ground, it means “it’s time to get the boats ready for fishing.”

Camellia trees make up more than 60 percent of the forest on the island.

After a 10-minute stroll along the walkway, past the sun trees and the bamboo forest, a world of camellias awaits. On the trees, on the ground, there were flowers everywhere.

As the path is just two meters wide, the petals have taken over the walkway, with not a spot left uncovered. The crimson flowers present a visual spectacle, no doubt due to the fact that they haven’t yet been trodden on. Environmental guide Kim Hyun-kwon insisted that Nae Island is a prime place to experience the beauty of camellias.

“There’s no other island better for flower spotting,” said Kim. “Because it’s relatively unknown, it’s not as crowded and it feels like you’ve rented the island.”

But for those wanting more than just flowers, they’ll be glad to know that Nae Island offers more than just camellias. At the southernmost tip of the island, Fairy Lookout has a view like no other place. From here, the sight of the intertwining Haegeum River and Oe Island is breathtaking. The Nae Island walking path winds along the coastline, and because there aren’t many people it feels as if you’re trekking through a forest. But, in between the trees, glimpses of the blue sea bring a breath of fresh air.

As you come down the walkway and descend on the town, the air is a lot warmer. All the while, cries of silvereyes provide the perfect soundtrack. These birds are the camellia trees’ lifesavers because they go from one branch to the next spreading pollen. The reason that the flowers are so red is for the birds to spot them easily. The camellias and the birds have an intricate relationship, with the trees much in debt. After the birds have taken the nectar, the flowers fall to the ground, which signals the end of pollination.

Cho Dool-ja, who was born and bred on the island, said that apart from the camellias there was another sight worth checking out along the harbor: Mongdol Beach.

“During low tide, the rocks are covered in green laver, so you can also see sea urchin, too,” said Cho. “When the sun is shining, the beach is a sparkling green hue,” she said.

With nine families and 14 individuals whose average age is 66, the island comes off as desolate. Each year, the population decreases and it’s not hard to see why. While the primeval landscape is attractive to those wanting a break, Nae Island hardly offers the best conditions for living.

But there is change in the air. Since 2010, the Ministry of Security and Public Administration has included Nae Island on its “Masterpiece Island Best 10” initiative; in 2011, the island was included on the list of towns to receive benefits from the Korea National Park Service. Thanks to these two groups, the town was given more than 2.4 billion won ($2.2 million) to spend.

Usually, tourists on the island outnumber locals. Last year, the island attracted some 22,546 visitors, a 235 percent increase over the two years before the handouts.

Accordingly, the lives of the island’s inhabitants have changed, too. While fishing was the main livelihood in the past, locals operate guesthouses and the like these days.

With hostels like “The house of 80 years of marriage” and “The house of grandma who came to the island after getting married at 18,” tourists are never left without a place to stay.

Choi Ok-sun, 61, the owner of an inn, left the island at 17 but returned four years ago and has fallen in love with her hometown again.

“I came back with my parents and it feels like the island is a present that my parents left me,” said Choi. “I’m so happy to call such an island home.”

Next month, she will open a coffee shop and regional specialty shop that stocks laver among other things.

To get to the island, you must go to Gujora Harbor in Geoje. The island is accessible by a 10-minute boat ride. The return ride costs 10,000 won and operates from 9 a.m. to 5 p.m.

The walkway that lines the island takes 1.5 hours to complete, while overnight stays at one of the local inns cost between 10,000 won and 15,000 won per night. It takes about five hours by car to get to Geoje from Seoul. 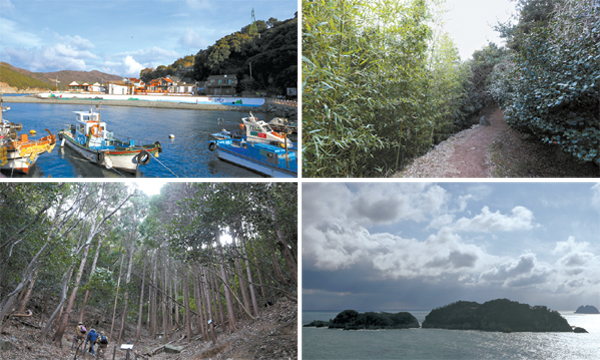 There are other spots across Korea where camellias can be spotted, but the first place that most people think of is Jisim Island.

The small island brimming with various groves is a sight to behold for flora enthusiasts.

From Jangseung Harbor, the island is reachable in 20 minutes by boat. From the dock on Jisim Island, a camellia flower tunnel is just five minutes away.

The walkway on the island is 4 kilometers (2.5 miles) in length and is the perfect place to take in the picturesque scenery. In particular, the point past Dragon Cave offers the best views.

Geomun Island, also in South Jeolla, is worth visiting. More than 70 percent of the island’s trees are camellias. A 1.3-kilometer walking track is the highlight. It’s about a 90-minute boat ride from Yeosu to Geomun Island.

Bogil Island in South Jeolla is home to camellia flowers that are regarded as some of the most elegant. This is due to the fact that poet Yoon Seon-do from the Joseon Dynasty (1392-1910) used to write poetry here while looking at the flowers.

Beginning in March, camellia flower buds sprout up in less warm parts of the nation.

Lookouts on the mainland include Baekryun Temple in Gangjin District, South Jeolla; Seonun Temple in Gochang District, North Jeolla; and the Maryang Port area in Seocheon, South Chungcheong. They are all designated as natural monument sites.

This winter was marked by the presence of snow. There was heavy snow everywhere, and a flu virus has recently been making the rounds. Gusts of wind from the East Sea have also caused a lot of grief for captains left stranded on ports.

But rumor has it that spring has sprung, with the camellia flowers as evidence.

The southern provinces have already turned red from the sprouting of the flowers.

Camellias symbolize spring. Although they blossom in winter, they last until April. Down south, these flowers are in their prime at this time of the year.

Camellias are unique in that they bloom twice in their life cycle.

The whole flower, rather than just the petal, falls to the ground and then blossoms again as it did on the tree.

These flowers are sighted mostly on Jeju Island, Seocheon in South Chungcheong and in the southern provinces.

For those chasing after the flowers, it helps to leave early in the day as they look best when wet with morning dew.