LeBron bloodied but gets a win over Oklahoma

LeBron bloodied but gets a win over Oklahoma 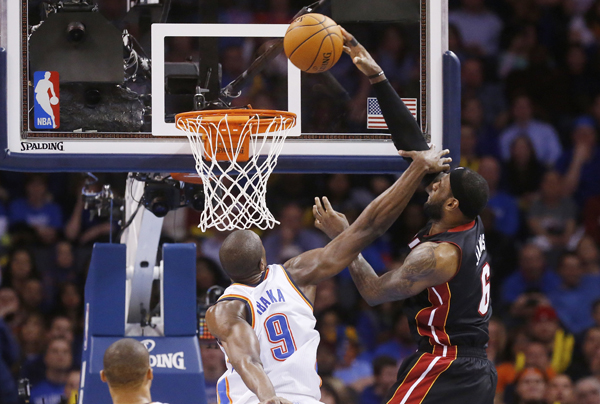 LeBron James sat silently in front of his locker with a towel draped over his head, not wanting to reveal the effects of a hit to his nose that prematurely ended his night.

His Miami Heat teammates finished off a 103-81 win over the Oklahoma City Thunder without him on Thursday night. Miami’s star forward went down with 5:50 remaining after he was struck by Oklahoma City’s Serge Ibaka on a drive to the basket. James finished the dunk, but he was bloodied and he left the court with a towel over his face.

“I’m like everybody else, you’re used to seeing him like Superman, get up and sprint back even after tough hits and tough falls,” Heat coach Erik Spoelstra said. “So we knew something was up.”

James landed the hardest blow long before that. He scored 16 of his 33 points in the first quarter to put the Thunder in a bind, and the Heat rolled to a lopsided win. James passed a concussion test, but the damage was done.

“He has a swollen nose right now. It’s bleeding,” Spoelstra said. “We’ll evaluate him when we get back to Miami, but it’s sore.”

The Thunder were the ones shaken up after James made his first five shots and scored 12 points in the first 4:11.

“It was flawless,” Wade said. “He was aggressive defensively, he was able to play passing lanes and be who he is. That was a great start on the road by our leader. It was something that we needed.”

Wade had 24 points and 10 assists, and Chris Bosh added 24 points for Miami, which won its fourth straight and avenged an earlier loss to Oklahoma City. It was a good step for the Heat, who are trying to catch Indiana for the top record in the Eastern Conference.

Kevin Durant scored 28 points for Oklahoma City, which lost at home for the first time since Jan. 5.

Durant has been the popular favorite to win the NBA MVP award, but Wade said James is still in the hunt.

Russell Westbrook, who had missed the previous 27 games after having surgery on his right knee, started and scored 16 points in 24 minutes. He made 4 of 12 shots.

“I’m just going to keep getting him better, and as the season goes along, as he gets more comfortable in game shape, we’re going to see a better Russell every night,” Thunder coach Scott Brooks said.