LG Electronics photographed the aurora borealis with the G Pro 2 in Yellowknife, Canada. Provided by the company

To address the reputation of LG smartphones for inferior camera technology, the G Pro 2 has a 13 megapixel camera with enhanced resolution, an optical image stabilizer (OIS), Plus technology to produce a sharper image and Magic Focus, which allows the focus to be adjusted after a picture is taken.

Last year’s G2 was the first LG smartphone to feature the OIS technology. Plus technology, according to the company, upgrades clarity by improving auto-correction software.

Slow motion allows users to play a video as slow at a fourth of the normal speed.

In addition to the enhanced camera, LG says the new phablet comes with other functions to enhance user experience. 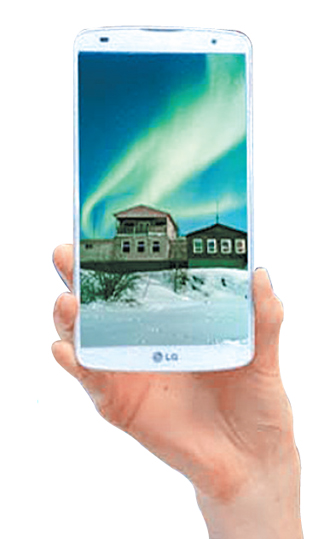 The most eye-catching function is called the Knock Code, which allows users to unlock the smartphone simply by a preset series of finger movements.

The function divides the screen into four rectangular areas and designates a number to each rectangle. When users have a two-to-eight-digit password, they can just tap each corresponding rectangle in the air in the correct order.

LG says Knock Code boosts security because it does not leave fingerprints on the screen.

The G Pro 2 also allows individual files to be locked.

While the company is trying to push its high-end models, speculation is that the price was set 100,000 won below a million in the hopes that consumers would feel like the phablet is still affordable.

The company announced it plans to release the new-generation phablet in overseas markets within the first half of the year.

In China, LG is known to have started a compliance test with the previous model G Pro and plans to launch the model within the first quarter.

“We cannot forecast when we will be able to enter the Chinese market with the G Pro 2, because the country is still testing its LTE-TDD network,” the spokesperson said.