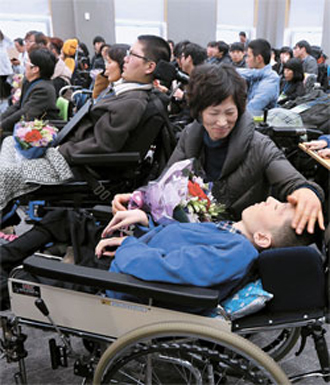 Gangnam Severance Hospital hosted a special ceremony Wednesday for a dozen of its patients, all of whom suffer from rare muscular diseases. The participants, who receive treatment at the hospital’s respiration rehabilitation center, have all gone on to attend college.By Byun Sun-goo

Gangnam Severance Hospital hosted a special ceremony Wednesday for 12 of its patients, all of whom suffer from rare muscular diseases. Seven were celebrating admission into college, while the others had just graduated from their respective universities.

Kim Min-jae was among them. He has spinal muscular atrophy (SMA), which causes the muscles to deteriorate over time and can create severe respiratory difficulties. It can even lead to cardiac arrest. The 19-year-old was just admitted this year to the computer engineering program at Daegu University.

Kim can’t move his body and can only turn his head slightly. To study, his mother has to scan his books and display them on a monitor, which was specially designed for him so that he can read while lying down.

“I want to do something challenging, like enter hacking contests,” Kim said of his future plans. “I want to be a white-hat hacker who prevents unethical hackers [from penetrating security systems] and establish a data security company.”

His brother Kim Young-kwan, 24, who also suffers from SMA, participated in the ceremony as well, and the young men were accompanied by their mother, Kim Yang-suk.

The elder Kim previously entered the law department at Sogang University and is in his fourth year of study.

The ceremony was specifically held at the hospital to accommodate the patients, all of whom receive treatment at its respiration rehabilitation center, the only facility that provides such services in Korea.

For those who attended, the center has made a drastic impact on the quality of their lives, giving them the confidence to work toward their goals. The celebration was also a chance for them to mark all they had accomplished.

“At first, [my] university didn’t really recognize disabled students,” said Park Ju-seong, 24, who will graduate from the Ajou University this month. “But later [administrators] put in seats for the handicapped after seeing that [we were trying] to overcome our disabilities.”

At first, patients with muscular diseases couldn’t venture outside of the intensive care unit because their breathing machines were fixed in place. But Kang changed that, providing a mobile ventilation supporter - a movable device that can help patients breathe without the need to insert tubes.

“[Before], breathing was like a labor that I desperately continued,” Shin Hyeong-jin, another patient, acknowledged in a speech during the ceremony.

The 31-year-old has suffered from SMA since he was a baby, but in 2002 succeeded in entering the computer engineering department at Yonsei University, one of the most prestigious schools in Korea.

He is currently working toward a combined master’s degree and doctorate there, where he is known around campus as “Yonsei University’s Stephen Hawking.”

“Since you have all entered universities - which isn’t easy, even for those without disabilities - I am sure you will be able to break through other obstacles as well,” Shin added.