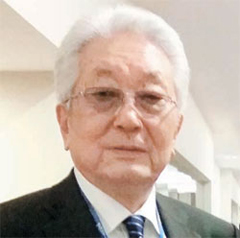 The Sochi Olympics are a lonely time for North Korean Chang Ung, 72, a member of the International Olympic Committee. Chang represented the North at the IOC’s general meeting from Feb. 5 to 7, which took place at the Radisson Blu Resort and Congress Center in Sochi, Russia, because no North Korean athletes qualified for the Olympics.

Several times, Chang told the committee that it must build more detailed support programs for athletes’ training. Later, he shared some ideas with Princess Anne of Great Britain. Chang is popular among his fellow IOC members because of his classy business manner and fluent English, Russian and French skills.

However, Chang became quiet after the public meeting and maintained a reserved attitude toward the media. He was popular among the foreign reporters covering the Olympics, including those from Japan, but spoke little about himself. Before the two Koreas reached an agreement to hold a war-separated family reunion on Feb. 5, he was rarely seen.

After a banquet with Ban Ki-moon of South Korea, the secretary general of the United Nations, the JoongAng Ilbo tried to interview Chang, who was going back to his room, but he declined.

But just four days before the South-North family reunions on Feb. 16, Chang had a short conversation with the JoongAng Ilbo, his only talk with a Korean publication, in a restricted area of the lobby.

When asked about the family reunions, Chang said, “It is what politicians care about. I don’t really know about the subject.”

From his vantage point in Sochi, he’s kept a close eye on everything.

“I heard that many reporters raised issues that the hotels in the Olympic village were in bad condition,” Chang said. “Despite such failures in facility management, I think the sports events have been great.”

The next Winter Olympics will take place in Pyeongchang in 2018. Chang made only a brief remark about them.

“Well, people have put so much effort into it, so it [the Pyeongchang Olympics] will go well,” he said.

At one point, a 19-year-old Russian volunteer praised Chang’s fluency in Russian.

“I was able to speak Russian since even before you guys were born,” Chang joked.

Later, the reporter approached Chang, who was trying to get into a car, in order to give him a Sochi Olympics commemoration plaque that featured a likeness of Russian President Vladimir Putin. He declined to take it, saying that the plaque was made to criticize Putin.

The reporter instead tried to give him pieces of Russia-North Korea amity post stamps, but Chang again declined to accept them.

“I already have many of those. Take these instead,” Chang said, as he gave her pieces of his four name cards.

Then, joking with another IOC member about the reporter as he left, Chang said, “She’s a dangerous person, so be careful. Reporters talk too much.”