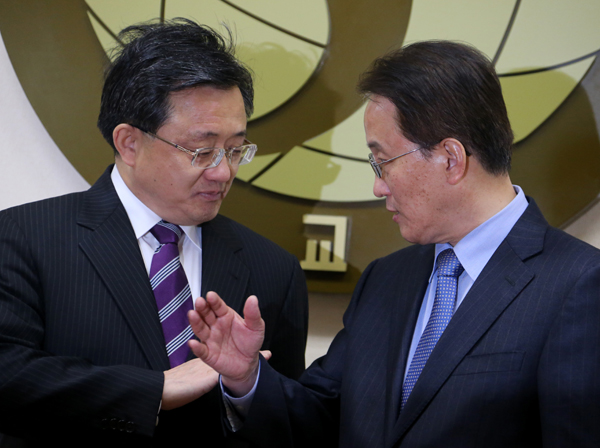 Chinese Vice Foreign Minister Liu Zhenmin, left, talks with his South Korean counterpart Lee Kyung-soo yesterday during their meeting at Foreign Ministry in Seoul. Liu arrived in Seoul on Thursday after visiting North Korea, in a rare back-to-back trip by a ranking Chinese official to both Koreas. [NEWS1]

China’s Vice Foreign Minister Liu Zhenmin wraps up his three-day Seoul visit today, capping high-level talks here about the situation in North Korea and relaying information about his discussions in Pyongyang earlier in the week.

This marks the first time a high-level Chinese official has come straight to Seoul directly following a Pyongyang visit to report on talks held there, said a South Korean senior government official yesterday.

During his four-day visit to Pyongyang, North Korean officials reportedly emphasized the importance of unconditionally resuming six-party talks with China, Japan, Russia, the United States and the two Koreas, stalled since 2008 when the North walked out of denuclearization efforts. They also conveyed to Liu a desire to improve relations with the South.

But an early resumption of the talks doesn’t seem to be in the works yet.

The Seoul official said that Liu warned the North against further nuclear or missile testing and reminded North Korea that it must resolve the nuclear issue with “concrete actions” if it wants six-party talks to resume.

North Korean officials took the opportunity to reaffirm that denuclearization was a dying wish of the late North Korean leaders Kim Il Sung and Kim Jong-il.

Vice Minister Lee in turn conveyed to Liu the outcome of the first high-level talks between the two Koreas held last week, the family reunion event and President Park Geun-hye’s reunification policy, including her view that reunification would be “daebak,” or “jackpot,” the Korean foreign affairs official said.

Liu’s Pyongyang visit “can have significance in that a senior official took the initiative to visit after the Jang Song-thaek situation,” said the official. “That he came to South Korea to explain the talks is an important advancement.”

Liu conveyed a strong warning to Pyongyang against “war and chaos,” along with the conditions needed for a resumption of six-party talks.

China’s Foreign Ministry spokeswoman Hua Chunying said at a briefing Thursday that “China is committed to upholding peace and stability on the Peninsula, promoting the process of denuclearization and the six-party talks.”

She added that China would “continue to make positive efforts to that end in its own way” without specifying further.

It is also rare for Beijing to go public with information about its talks with North Korean officials.