However, it’s questionable whether this push has helped hanji become more widely recognized. Instead, the industry is dwindling as the paper is used less often in everyday products.

Once, hanji had many uses, although one might think it was mainly used as a medium on which to write. Poor people who couldn’t afford to have a thicker coat put hanji inside their ?clothing in the winter to add an extra layer for warmth. The paper was even used to make windows and doors in traditional homes, until it was replaced by glass windows and wooden doors in modern housing. Layers of hanji were also made into armor to protect soldiers from arrows, and to make baskets, pillows and floor mats.

The versatility of hanji, which has existed since the Silla Dynasty (57 BC - AD 935), made it valuable when Korea and China began trading.

More recently, the paper also proved its longevity. In 1966, three thieves tried to break up Seokgatap, a stone pagoda in Gyeongju, North Gyeongsang, to obtain the small crystal remains of cremated monks buried underneath. Although the thieves failed and got caught, the Korean government used the chance to check what was buried underneath the pagoda and found a printed copy of Sarira Reliquarie, Korea’s National Treasure No. 126, the oldest known printed Korean documents that China had claimed as its own cultural asset.

The paper used to print the documents was hanji made in the early eighth century, according to the National Museum of Korea in 2007, demonstrating its durability.

“Traditional paper endures a strong force when it is pulled or [when you attempt] to tear it apart as it is weaved together with bark fibers from mulberry trees,” said Professor Yoon Seung-lak of Gyeongnam National University of Science and Technology in his report on the characteristics on mass-produced hanji in 2002. 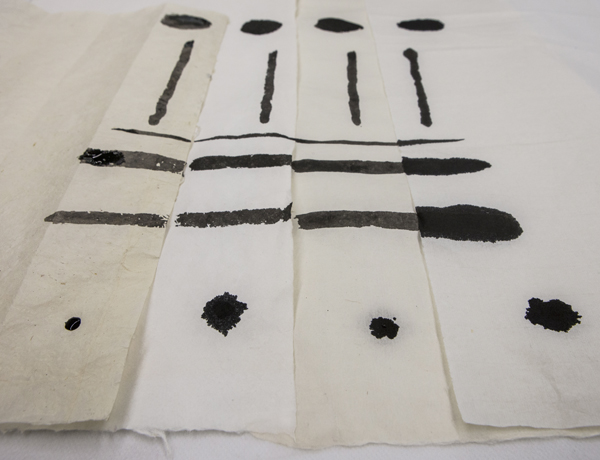 Ink dots on two types of hanji on the far left, and third from left, barely make a smudge. The remaining dots, on paper made from mulberry trees in China, second from left, and rice paper, which are commonly used by painters, leave a bigger mark with the same amount of ink in an experiment conducted by the JoongAng Ilbo. [JoongAng Ilbo]

A book published in Russia in 1900 stated that hanji is so strong that it is good for making ropes or nets.

There is also research to prove how hanji can be used in modern living. In one experiment in 2009, a high school in Jeonju, North Jeolla, compared glass windows with ones made with hanji. The traditional paper windows provide excellent ventilation.

The JoongAng Ilbo, an affiliate of the Korea JoongAng Daily, conducted an experiment to see whether writing on hanji smudges less than on other types of paper. While writing on hanji made from Korean materials showed small smudges, paper made from the bark of imported mulberry trees from China or rice paper used mainly for painting produced larger smudges.

Kim Ho-suk, a professor of arts and craftsmanship at Korea National University of Cultural Heritage, said high-quality hanji was made by craftsmen who pounded the paper with bats so that its surface could become more dense and flat. Jeong Seon, a famous Korean artist whose pen name is Gyeomjae (1676-1759), and painter Kim Hong-do, also known as Danwon (1745-?) were known to have used hanji made with this process.

“The mulberry tree in China has less strength as it is grown in warm weather,” said Kim. “On the contrary, such a tree grown in Korea goes through warm and cold weather and becomes much stronger.”

Despite its quality, the production of hanji hasn’t gotten much attention. It’s also becoming harder to find.

“Hanji is used as an inner cover underneath the wrapping paper when giving a gift to guests,” said a Blue House official. It’s not used to make the outer cover, just the inner shield.

Kim Il-su of Imsil, North Jeolla, one of the few hanji craftsmen left in the country, still makes the paper, which he started doing when he was 8. However, his business has been shrinking in the past two decades, to the point where his annual sales are only 30 million won ($28,000). Every winter, Kim and his wife work from 7 a.m. to 6 p.m. to peel the bark from mulberry trees and prepare it for the paper-making process. Because they are not as strong as they used to be, they sometimes hire a worker for 50,000 won a day to help them.

Hanji craftsman Shin Hyun-se of Uiryeong, South Gyeongsang, faces similar difficulties. Shin, who started making hanji when he was16, recalls that there were about 80 to 90 shops near his factory that focused on making hanji in the 1960s. His factory is running at 50 percent capacity and brings in only about 60 million won in annual sales. After subtracting his costs, about 30 million won, he barely makes enough to get paid for his own labor.

According to statistics from the Ministry of Culture, Sports and Tourism, 17 of the 24 hanji companies that remained in 2010 had work spaces that were 330 square meters (394 square yards) or smaller, which is not enough space to efficiently produce paper.

Businesses that center on hanji-making have been declining since the 1980s. In an attempt to survive, 22 companies in Jeonju, where most hanji producers are based, created an union in 1993 to share costs, labor and materials, but it disbanded in 2002. Although some of those companies are still in business, a lot of the manufacturing infrastructure has collapsed. As of 2012, there were 26 hanji-making companies left in Korea.

Today, few people are looking for traditional Korean paper for printing or painting; instead they are choosing Western-style paper. Also, as people live in apartments, rather than in hanok, hanji is rarely found in homes.

The declining demand has resulted in fewer craftsmen remaining in the trade. Sixty-five of them were known to be active at 24 companies in 2009 and only 23 of them were under 50, which is common in dwindling industries dominated by older workers.

Although Korean’s hanji industry dominated the scene in the 1980s, that changed in the 1990s when paper from China entered the market.

“Korea’s cost to make hanji is up to three times more expensive than imported ones,” said Choi Young-jae of Cheonyang P&B, a manufacturer of mass-produced hanji. “Currently, over 80 percent of hanji-making materials are imported.”

He added that while imported bark from mulberry trees is ready to use, Korean bark must be boiled and processed, which takes much longer. Two or three people must work for six months to make prepare one ton of bark for the production process.

“There is no power left for [Korean companies] to push China out of the market, especially because Korea’s handmade hanji manufacturing industry has been destroyed mostly,” said Choi.

The Asan Institute for Policy Studies contributed to this article.