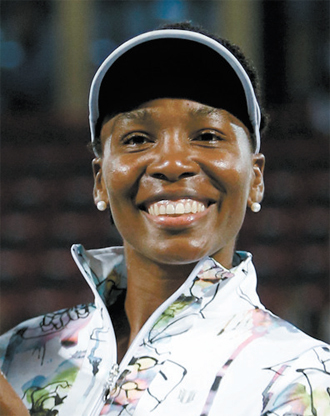 Venus Williams won her 45th career WTA title at the Dubai Tennis Championships in an impressive 6-3, 6-0 victory over Alize Cornet of France in the final on Saturday.

Williams, who will move up to No. 29 in Monday’s updated rankings, last won a title at the 2012 Luxembourg tournament.

“I have had a good week,” she said. “Everything is falling together.”

The former world No. 1, Williams won all five of her matches this week in straight sets.

“Just a lot of match toughness, mental toughness,” said Williams, when asked to explain her remarkable week of play. “When things got tough, I definitely got going this week.

“If I was down break point, when push came to shove, I was pushing and shoving, I guess,” she added, laughing.

The scoreline didn’t indicate how strong an effort Cornet put into the final, often matching Williams stroke by stroke, but falling short in the end.

After Cornet squandered a 2-1 lead with a service break by losing the next four games, she was in tears during the changeover.

“I think 6-3, 6-0 is a bit tough in an hour and 30, so I guess there was a battle on the court, but she was just better than me today,” Cornet said. “She was playing more aggressive.

“She was pushing me out of the court very far from the baseline, and I didn’t play as deep as yesterday, didn’t serve as well. She deserved to win.”

Williams closed out the first set on a third set point with a clean backhand winner. In the second set, it was Williams all the way.