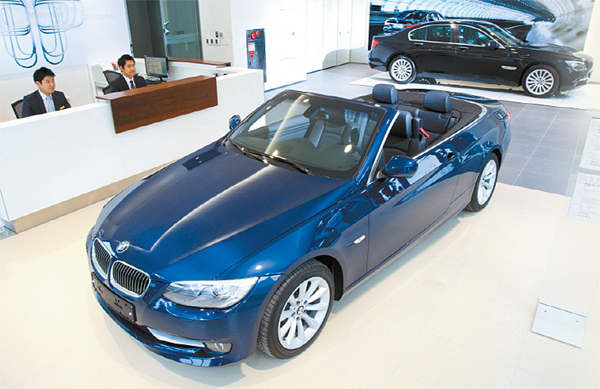 Korean cars still dominate the streets of Seoul, but imports continue to gain ground. After breaking the 10 percent barrier in 2012, foreign brands are closing in on a 15 percent share of the domestic market.

That’s an achievement that took just two years, after going from a 5 percent to 10 percent market share in five years. It is all the more impressive considering that imported cars’ share remained below 1 percent for 15 years after the government opened the market to foreign companies in 1987.

According to the Korea Automobile Importers and Distributors Association (Kaida) last week, imported brands had 14.6 percent of the domestic market in January. While foreign brands sold nearly 15,000 units during the first month of the year, the five Korean automakers - Hyundai, Kia, Renault, GM Korea and Ssangyong Motor - sold 86,000-plus units.

“Including foreign brands like Ferrari and Maserati, which are not members of Kaida, the imported automobile market share exceeds 15 percent,” said Yoon Dae-sung, executive managing director at Kaida.

The growing popularity of imported cars is most evident in Gangnam.

“We have 200 new cars registered every day on average and roughly 170 are imported brands,” said Kim Ae-young, who heads the automobile registration department at the Gangnam District government office.

Leading the import charge are German companies that are increasing the number of cars rolling into Korea and ramping up their service, which has been considered a weak point in the past.

Japanese brands, which represented three of 10 imported cars sold in Korea through 2007, continued to struggle in 2013, with their market share falling below 10 percent for the first time.

Until just a few years ago, there was fierce competition between Japanese and German brands for the No. 1 import spot. BMW and Lexus, in particular, butted heads for several years, until the mid-2000s.

However, the situation rapidly changed and tipped toward the Germans when Lexus was drawn into a quality mismanagement case in the United States. The investigation affected Korean consumers’ perception of the brand and BMW passed Lexus, which has yet to recover.

While more customers are opting for imported brands, Korean automakers, which held a dominant position in the past, have been unable to effectively counter the recent foreign gains.

This is a stark contrast to the past, when Hyundai and Kia closely monitored the movement of imported brands and responded with strategic design measures in the early 2000s.

“Hyundai and Kia back then were putting their energy into closely analyzing the lineup of Japanese automakers as they feared growing demand for brands such as Toyota, Honda and Nissan,” said an industry official who wished to remain anonymous.

The official said that because Korean automakers focused on their Japanese competition, they overlooked the German brands. 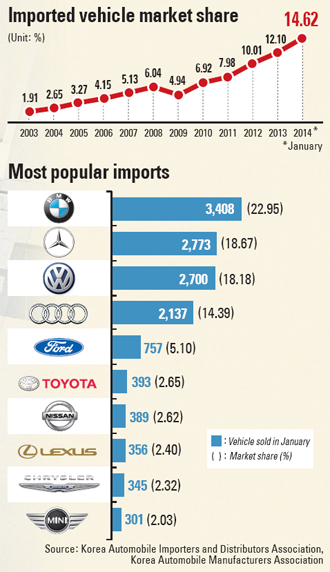 German automakers expanded their presence in the market by pushing diesel models that gained wide popularity, and the Koreans failed to develop their own diesel lineups.

“In the case of the Volkswagen Tiguan, which is the second-best-selling car this month, there is no other model by Korean automakers that can match it,” said an industry source.

For the first time ever, the combined market share of Hyundai Motor and Kia Motors has dropped below 70 percent.

While the Korean automakers lose customers on their home turf as they seem preoccupied with expanding in the global market, imported brands have enhanced their marketing to appeal to younger customers.

To break down customers’ loyalty to “made in Korea” products, they have been employing various cultural strategies.

Since 2008, Audi has been running a cultural performance project called “Audi Live.”

This year, Audi invited U.S. sensation Bruno Mars to perform in Korea in April, and although the cheapest seat was 99,000 won ($92), the performance sold out an hour after tickets went on sale.

Audi also was behind the Jamiroquai concert in 2008 and the Lenny Kravitz show in 2012.

The event was intended to increase knowledge and exposure of the brand among young people by displaying Beetles from the early years up to the present.

Last November, Mercedes-Benz donated one of the company’s Patent-Motorwagens built 128 years ago to celebrate the 130th year of the Korea-Germany trade relationship. Many speculate that the real purpose was to publicize the German automaker’s long history.

Meanwhile, BMW is trying to broaden its appeal with its first driving center in Asia. The company announced last year that it will invest 70 billion won in the project scheduled to open in July at Yeongjeong island, Incheon.

The driving center will have six courses on 240,000 square meters (59.3 acres) of land. It will also be equipped with cultural spaces including an art gallery and restaurant.

“Imported brands in recent years have employed various marketing strategies to get closer to Korean consumers,” said Han Jang-hyun, a professor at Daeduk College. “Korean automakers, on the other hand, are suffering from a damaged brand image due to several quality problems.”

In a recent report by J.D. Power, Hyundai Motor’s ranking on vehicle dependability dropped from 10th in 2012 to 27th. Although Kia’s improved from 25th in 2012 to 19th, it remains in the lower ranks.

The study reportedly prompted the automaker’s heir and Hyundai Motor Vice Chairman Chung Eui-sun to make a sudden visit to the company’s plant in the United States and urge employees to put more emphasis on quality control.

The professor said Korean automakers should be focused not only on selling cars as products but also on brand culture.