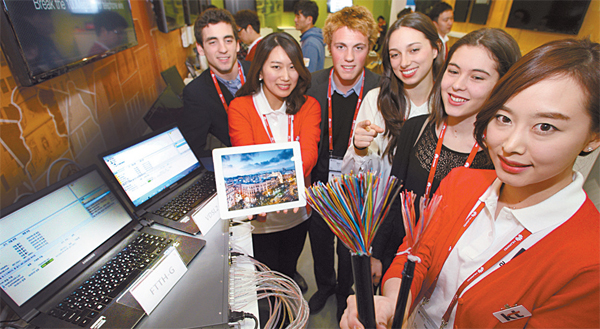 Models show KT’s FTTH-G technology at the company’s booth during the Mobile World Congress in Barcelona yesterday. Provided by the company

KT said yesterday that it has developed a technology that enables copper telephone cables in old buildings to provide Internet service at speeds never before accomplished.

The company will showcase the technology during the Mobile World Congress, the Korean mobile carrier said.

KT said it uses a solution called FTTH-G, which provides at least 200 Mbps service two-way using a pair of telephone lines. KT said download speeds can be much faster than 200 Mbps. For example, the download speed can be 300 Mbps if the upload speed is reduced to 100 Mbps, the company said.

KT said the FTTH-G solution can be adopted by building owners because it saves them the cost of replacing copper wires with more advanced cables, the company said.

KT said it will run a pilot project for the technology in some older apartment buildings in Gangnam District.

“We will further enhance FTTH-G and create a technology that provides at least 300 Mbps Internet speed next year,” said an official of KT. “We will utilize various types of wires and enable old buildings to provide Internet at gigabytes-per-second speeds.”