Samsung steals a march on MWC

Samsung steals a march on MWC 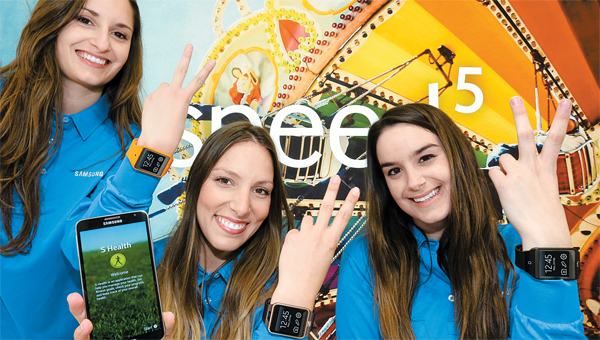 Samsung Electronics is seeking to steal the show with new wearable devices at one of the world’s leading IT trade fairs to be held in Spain this week.

The Mobile World Congress, which has attracted about 1,800 companies and 75,000 people from around the world, will kick off its four-day run on Monday.

But Samsung unveiled its new smartwatch, the Gear 2, yesterday at the show’s main venue, the Fira Gran Via convention center.

The Gear 2 is Samsung’s first smart device running on Tizen, an operating system developed by an alliance of IT companies led by Samsung and Intel.

Samsung has worked for years to develop the open-sourced Linux system to reduce its dependence on Google’s Android system, which now runs on more than 80 percent of the mobile phones around the world.

After delaying the unveiling of Tizen last summer, Samsung was expected to launch its first Tizen-based phone at MWC.

But the world’s largest smartphone vendor chose a smartwatch, not a smartphone, as the first device for its Tizen system, a move that some analysts saw as clever. It buys time for Samsung to test more apps for Tizen phones.

The Gear 2 comes with enhanced battery power and lighter weight, two of the deficiencies pinpointed on the original Galaxy Gear that was released in September.

The Gear 2 is 5.8 grams (0.2 ounces) lighter than the Galaxy Gear and 1.1 millimeters (0.04 inches) thinner. Its battery can last two or three days on a charge, the company said.

Its camera is now in the main body of the device instead of on the strap, as it was on the Galaxy Gear, which enables users to change straps when they want. New functions such as remote TV controlling and fitness features have been added.

Samsung is branding the Gear 2 as the Samsung Gear 2, not the Galaxy Gear 2, as it tries to differentiate its non-Android devices.

The name change also reflects the company’s resolution to expand the use of wearable devices from a mobile platform to other Samsung platforms, the company said in a statement.

Samsung regards the Samsung Gear 2 as an accelerator for its “Internet of Things” vision, in which the smartwatch will sync with appliances beyond the smartphone, such as TVs, air conditioners and refrigerators. The Samsung Gear 2 is preloaded with a function that controls TVs using a sensor.

Samsung’s efforts to build up a Tizen ecosystem is not limited to home electronic appliances, according to the company.

“We have opened ourselves up to the possibility that the Samsung Gear 2 can be in sync not only with mobile devices but also with cars,” said an official from the company.

Samsung said it will start global sales of the Samsung Gear 2 in April. The Samsung Gear 2 Neo, which doesn’t have a camera, will also begin its sale in April. About 150 countries will be the first to see the product on their shelves, it said.

Many other IT companies are also planning to show wearable devices at the MWC, including China’s Huawei and Taiwan’s HTC.

Samsung’s home country rival will also showcase around 130 smartphones of eight different kinds - such as the G Pro 2, G Flex, G2 Mini and L Series III - in a booth decorated to the theme of “Knock and Discover Tomorrow.”

The Knock Code, an innovative function featured on the G Pro 2, which allows users to unlock a smartphone by a preset series of finger movements, will be promoted heavily during the event, the company said.