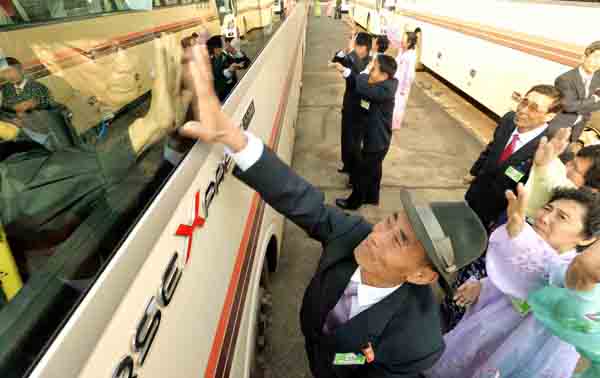 South Korea’s Park Un-hyeong, left, bids farewell to his North Korean younger brother Un-hwa, right, at the Mount Kumgang resort on Saturday, the last day of the first round of reunions for separated families. The participants in the second round departed for Mount Kumgang yesterday to start their meetings. [NEWSIS]

The second round of reunions of families separated by the 1950-53 Korean War started yesterday after the first round of three-day meetings ended on a bittersweet note Saturday.

At the snow-covered Mount Kumgang resort in North Korea, 357 South Koreans were reunited with 88 North Korean family members they haven’t seen since the Korean War.

“Father! We thought you were dead!” Namgung Bongja, a 61-year-old woman from the South told her 87-year-old father from the North. “I’m so sorry that mom died five years ago.”

Bongja said her father went missing during the war when she was a newborn baby. He told his wife he was going on a trip and never came back.

“We thought he was dead, so we even held the traditional ritual for him every year,” she told reporters. “But three years ago, I heard he was alive somewhere in Hamgyong Province in North Korea, and I was shocked.”

Bongja gave her father a winter jacket and medicine from the United States as presents.

Some people even flew in from abroad for the reunions, a once-in-a-lifetime chance to meet their long-separated family members.

“During the chaos of the war, my sister never came back after she went to school,” Choe Jung-soo, who flew from Toronto to reunite with her 80-year-old elder sister. “Although it was tough for me to come from Canada, I came because I should see her.”

Officials said those attending the second round are relatively younger than the first-round participants.

“In the first round, there were some very old people who had difficulties,” Song Jeong-hun, a South Korean doctor, said. “But the average age of the participants in the second reunions is relatively lower and they look healthier.”

Using the same schedule as the first round, the participants had group meetings between 3 p.m. and 5 p.m. yesterday, and attended a welcoming party hosted by the South Korean side.

The seniors who participated in the first round ended the three-day reunions on Saturday with heart-wrenching farewells in the morning.

Park Yang-su, the 58-year-old man who was abducted by North Koreans while working on a fishing boat in 1972, bid farewell to his 53-year-old brother from the South.

“It is heartbreaking to say goodbye to my brother after being reunited with him after 42 years,” Yang-gon, the South Korean brother, said. “Please stay healthy, brother.”

Chances for them to meet again are slim. So far, according to the Ministry of Unification, only about 21,000 separated Korean family members have been reunited through direct meetings and video conferences.

About 57,000 of the 129,000 South Koreans who applied for reunions in the past have died. About half of the living applicants are in their 90s.

According to the South Korean Red Cross, a total of six seniors were transported to hospitals in the South during or after the first round after their health deteriorated.

An 85-year-old woman, Lee O-hwan, fainted while she was hugging her sisters from the North. Another woman, 88-year-old Lee Yeong-sil, could not attend the final farewell on Saturday.