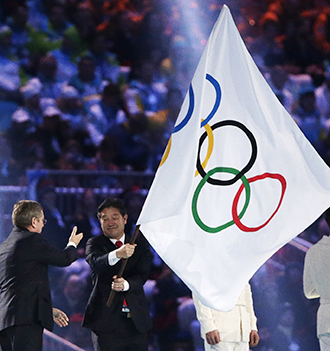 After the torch that had been blazing for two weeks at Fisht Olympic Stadium in Sochi, Russia, was extinguished during Sunday’s closing ceremony, it and the Olympic flag will head to Pyeongchang, Gangwon, the Korean host city for the 2018 Winter Games.

Korea has four years to prepare, but a lot of work needs to be done, including fostering young athletes in diverse sports and building decent venues that don’t have toilets without partitions or hotels with brown tap water, such as those seen in Sochi.

The closing ceremony took place at 8:14 p.m. on Sunday local time. Athletes and staff members from 88 nations entered the venue and looked back on the memorable moments they created in the last two weeks. Led by flag bearer Lee Kyou-hyuk, a veteran speed skater, Korean athletes including speed skater Lee Sang-hwa, the winner of the women’s 500 meters, and Kim Yu-na, the silver medal winner of the women’s figure skating singles, celebrated their achievements.

There were several performances, including music, ballet and circus. The Korean national anthem was sung by Korean children wearing hanbok (Korean traditional clothing) after Pyeongchang was introduced as the next host city and the Olympic flag was handed over from Thomas Bach, president of the International Olympic Committee, to Lee Seok-rai, chief of the Pyeongchang County Office.

For about eight minutes, Pyeongchang gave several performances with the theme of “A Journey Together,” under musical director Yoon Ho-jin. Artist Lee Jong-gil played the gayageum (a 12-string zither) and Jo Su-mi, jazz singer Na Yoon-sun and Lee Seung-chul sang “Arirang” (the Korean folk song). Korean athletes such as Kim Yu-na and skater Lee Sang-hwa, then came out to the center of the stage and invited the world to Korea with a message that read, “See You in Pyeongchang.”

About 2,800 athletes competed in 98 winter sport disciplines during the Sochi Games and Korea finished in 13th place in the medal count, claiming three golds, three silvers and two bronzes. Russia, the host nation, was No. 1 with 13 gold, 11 silver and nine bronze, thanks to many foreign athletes who changed their nationality to compete for Russia, including Ahn Hyun-soo, now Viktor Ahn, and Vic Wild, a U.S.-born snowboarder. Ahn won three gold medals and a bronze in the men’s short track, and Wild claimed two golds in snowboarding. It was the first time Russia had won the most gold medals since the 1994 Lillehammer Games, where it won 11.

“I think the Pyeongchang Games already began as soon as the Sochi Games are finished,” Kim Jin-sun, president of the Pyeongchang Winter Olympics Organizing Committee, told Korean media before the closing ceremony. “Since Korea has experience in hosting the world’s biggest sports events, including the 1988 Seoul Olympics and the 2002 Korea-Japan World Cup, we are very confident about managing the 2018 event successfully.”

Kim said that the Pyeongchang Games will be one of the most cost-efficient Winter Olympics, contrary to the Sochi Games, on which Russia has spent about $50 billion. 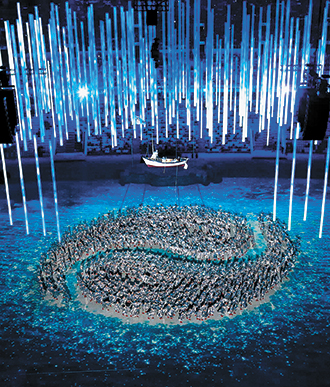 Performers recreate the symbol of the Korean flag, to inform the world about the 2018 Pyeongchang Winter Olympics, during the closing ceremony of the Sochi Winter Olympics on Sunday in Russia. [REUTERS/NEWS1]

“We are projected to spend about $9 billion,” he said. “It includes $4 billion that will be spent for building a high-speed railroad. Unlike Sochi, many venues, including the ski jump slope, are already completed.”

Kim added that the 2018 Games will show how Korea has advanced since 1988, when it hosted the Seoul Olympics. “It has been 30 years,” he said. “I’m sure that people coming from around the world recognize Korea as a well-advanced country.”

But Pyeongchang has some homework to do. During international sports events hosted by other regions, such as the 2010 Formula One Race in Yeongam, North Jeolla, many foreign reporters had to stay at love motels due to a lack of accommodations. They also had trouble reaching the event because of limited public transportation.

“Such problems will not be seen in Pyeongchang for sure,” Kim said. “Since it is a resort city, it already has many decent accommodations. We still need more accommodations, as many foreign tourists are predicted to visit, but we are attracting investments from private companies. Because the city was designated as a special tourist zone by the government, many small and large companies are considering investing in building entertainment facilities like resorts.”

Kim added that all the Olympic venues and other related facilities can be reached within 30 minutes. “Once the high-speed railroad is completed, it will only take an hour to get to Pyeongchang from Seoul,” he said.

Because Pyeongchang has been preparing for the Games for about a decade - Korea previously lost two bids to be the host city - it will not suffer from some of Sochi’s problems, like brown tap water at hotels and toilets without partitions at Olympic venues. But if Korea wants to truly enjoy its home event, the country seriously needs to foster more young, competitive athletes.

“One problem is that Koreans consider short track, for instance, to be like taekwondo, one that the nation ‘must win gold,’?” said Yoon Jae-myung, director of the Korean national Winter Olympics team. “We need to develop a team that just doesn’t rely on one or two top players.”

Koreans has never had stars in skiing, bobsleigh or the sledding disciplines. Yoon Sung-bin, 20, finished in 20th place in the men’s skeleton, but analysts said it will be very hard for him to win a medal in Pyeongchang.