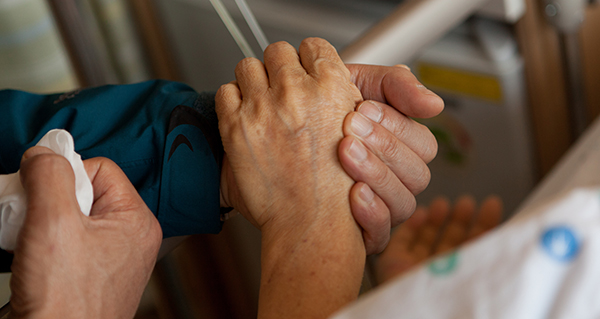 Where does life begin and end for humans? In most developed societies, the answer is the hospital. In Korea, 98.3 percent of 480,000 newborns were delivered in hospitals in 2012. And of the deaths in 2011, 72 percent died either in or on their way to the hospital. Birth and death have become a part of the medical process, with hospitals being the first and last place of our time in this world.

Deliveries in hospitals have helped to bring down the infant death rate to the levels of advanced countries. But the same satisfaction cannot be cited for deaths in hospitals. To be honest, hospitals just make death more convenient, relieving the physical and psychological strain for family members.

Some 40 years ago, I followed my mother to attend my grandfather’s funeral. In those days, I was not frightened about seeing my dead grandfather’s body behind the folding screen. We came to grips with death in natural surroundings. Until the 1980s, when somebody died in the neighborhood, the entire community participated in the funeral. Children joined the parade, carrying the funeral streamers. Funerals were a village affair and a celebration because dying at home then was a norm rather than a choice. In those days, deaths in hospitals accounted for just 15 percent.

In December last year, South Africa’s first black president and anti-apartheid icon Nelson Mandela died at his home in Johannesburg surrounded by his loved ones. Deaths at home have become rare in our country. About a century ago, Austrian poet Rainer Maria Rilke, who struggled with leukemia and died in the arms of his doctor, described in his book “The Notebooks of Malte Laurids Brigge” the anguish from the apathetic dying process amid the sterility and quantity of chemicals and machines in hospitals. “There are 559 beds to die [in this Paris hospital]. It’s natural mass-production … Quantity is what matters,” he wrote.

One is deprived of any will and choice in the last moments of life when they are spent in a hospital. Because there is an age limit to acceptance to intensive care wards, the dying is forever separated from young children. One dies in isolation, with tubes stuck in the nose and body, strapped to machines. Even the patients discharged from the hospital return to die on emergency beds in the hospital. Somehow being surrounded by doctors and a bunch of machines instead of among loved ones has become a dying ritual.

Regardless of being rich or poor, no place is better than one’s own bed when coming to terms with death. When the condition of an 85-year-old dementia patient turned so bad that water was the only thing that she could consume in her last few weeks, her children brought her home from the nursing home. They were with her when she let out her last breath. The eldest said she died in peace, and her family members were relieved to witness her peaceful end. In contrast, a cancer patient confined in a small hospital room only returned to her home in her dreams. She missed her daughter’s handicrafts, the garden she tended and, most of all, her small children. Her roommates also talked of the things they missed from home.

Kazuhiro Nagao, a Japanese doctor and vice head of the Japan Society for Dying with Dignity, who has witnessed more than 700 patients die, recommends home over medical facilities when confronting death. At home, away from the needles, checkups and bad hospital food, the pain can be lessened, making the dying process more peaceful.

As a patient, one is needy. But at home, he or she returns to being a father and mother. Nagao writes that none of his patients and family members who preferred home over hospitals regretted their choice. In another Japanese survey, nine out of 10 families who witnessed home deaths said their patients died in peace.

Choosing home over hospitals to die in is not so scary of an idea if medical professionals specializing in home medical services are available. There is nothing to fear if an around-the-clock emergency call line and home care services are provided.

Currently, none of that is available in Korea. There are only a few visiting hospices. More and more people in the United States, Britain and Japan are opting to die at home rather than in hospitals. We Koreans, too, should have more of a right to choose where and how we wish to end our lives.

The choice to die in a setting one is used to among people one loves should no longer be prohibited. Otherwise, Korea’s death quality will never go beyond the lowest levels among member countries in the Organization for Economic Cooperation and Development.