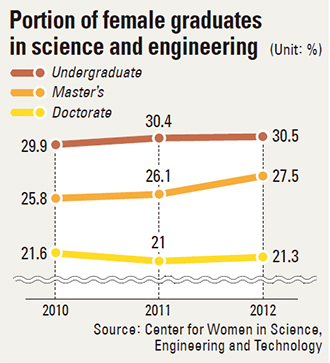 The government plans to nearly double support this year for female engineers who had to stop working to care for their children and want to re-enter the work force.

The Ministry of Science, ICT and Future Planning last year matched 58 female researchers with full- and part-time jobs at state-run science and engineering institutes, universities and private companies. This year, the government program hopes to place 100 women. Forty-seven of 58 women were hired last year at state-run research institutes like the Korea Institute of Science and Technology. Eleven participants found places at Ewha Womans University, Konkuk University and four other schools.

The government provides up to 20 million won ($18,613) annually per employee. Institutions must kick in at least 4 million won in assets and should also supply pension and employment insurance.

Any unemployed mothers with an engineering or science degree can apply to the program.

Selected candidates start working in May for 10 months. Subject to evaluation, employment can be extended as long as three years.

Since the program’s launch in 2012, the number of women applying has steadily increased. About 240 women sought positions last year, compared to 120 in 2012. The Center for Women in Science, Engineering and Technology has already seen more than 300 applications on its website.

The center will accept applications through March 27.