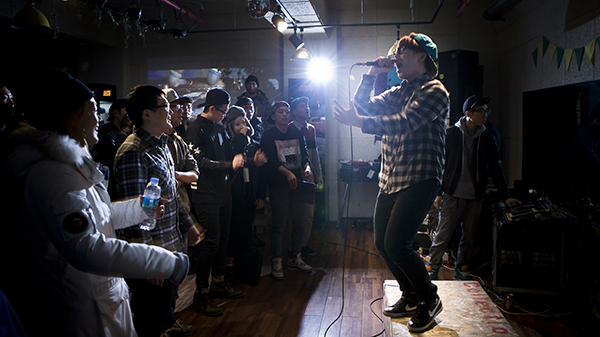 Rookie rapper G-Fu performs in front of the crowd at P-Bro Sound Studio. By Kwon Hyeok-jae

Grasping a mike in his right hand, rookie hip-hop artist G-Fu took to the stage to showcase his freestyle rap on Feb. 9 at a crowded studio in Mangwon-dong, western Seoul.

In rhymes and beats, the 23-year-old rapper started to tell his story while the DJ played. The crowd responded, shouting back the lyrics. There was no boundary between the stand and the stage. Sometimes, the rapper became the audience, and the audience became the rapper.

G-Fu’s stage was part of Every Mic, a show arranged by MC Meta of the Korean hip-hop group Garion.

The performance takes place every Sunday, and anyone who is interested in hip-hop can apply to perform and watch others rap for free.

The stage is about the size of a cubic meter (35 cubic feet), but the studio gets feverish once the show starts. P-Bro Sound, the record label behind Garion, provides the venue and the equipment. When the show is over, the crowd votes for the best performer, and if the result is a tie, there is a freestyle rap battle.

It’s been only two months since the show launched, but it has spread quickly through word of mouth. 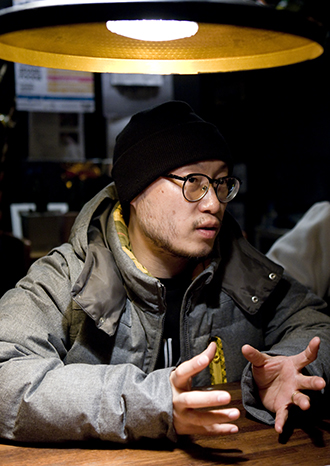 The number of members on the homepage has surpassed the 5,000 mark already, and there are 30 to 40 participants applying to rap on stage every week. Those who were previously only able to publicize their music on the Internet now have a chance to perform in public.

Kim Dong-ha, aka Noizy Fella, who was the runner-up in the sixth round, said he was so captivated by the rhymes of rap that he quit his job as a professional soldier and worked solely on hip-hop until he came across Every Mic.

“If you work alone, you are doomed to become a big fish in a little pond. [Every Mic] was a chance for me to get approval for my rap in front of many people,” said the 26-year-old rapper.

Jung Gi-chul, the winner, said he was able to find “another self” through rapping, adding that the stage acted as “everybody’s mike,” as the name of the event implies.

In fact, the show has become popular because there are so few opportunities in Seoul for underground rappers to perform, particularly after the club Master Plan closed its doors in 2002.

Master Plan, which opened in 1997, was a mecca for underground hip-hop musicians in the 1990s and was where a lot of talented rappers, including Garion, were discovered.

“Live stages are very important to underground rappers, which is why Nachaal [another member of Garion] and I always talked about opening a club when we earned enough money,” said MC Meta. “If you are a part of a crew, they can rent the whole place, but if you are on your own it is impossible. We wanted to make a stage where all people can harmonize under the name of hip-hop.”

Music critic Kim Bong-hyun, who also participates in arranging the show, said, “It will be a hip-hop hub where people can share information and interact with each other. We are also going to open some hip-hop-related seminars.”