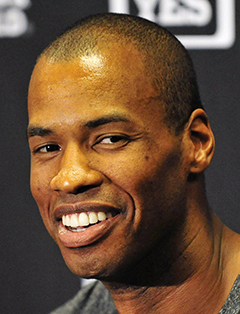 Veteran NBA player Jason Collins signed a 10-day contract with the Brooklyn Nets on Sunday, making him the first openly gay athlete on a team roster in any of North America’s four major professional sports leagues.

Collins, who in April revealed that he was gay in a Sports Illustrated article that was published after the National Basketball Association regular season, joined the Nets before their Sunday game in Los Angeles against the Lakers.

“Official: The #Nets have signed @jasoncollins34 to a 10-day contract,” the NBA team announced on Twitter.

The 35-year-old is not a well-known sports star, but he won widespread praise for his groundbreaking personal statement issued 10 months ago. Collins, who was nearing the end of his career, was not subsequently signed for the 2013-14 season.

“Jason told us that his goal was to earn another contract with an NBA team,” said Silver.

“Today, I want to commend him on achieving his goal. I know everyone in the NBA family is excited for him and proud that our league fosters an inclusive and respectful environment.”

Nets general manager Billy King stressed that the signing of the 7-foot (2.13-meter) center helped the Atlantic division team on the court.

“The decision to sign Jason was a basketball decision. We needed to increase our depth inside, and with his experience and size, we felt he was the right choice for a 10-day contract,” King said in a statement.

Collins, who has played with six teams during his 12 years in the NBA, has said he never had any grand plans to be the first openly gay player, but that events off the basketball court persuaded him to come out.

Collins was inspired by the 2012 Gay Pride Parade in Boston, he told Sports Illustrated, but delayed making an announcement due to a desire to protect his team, waiting until the regular 2012-13 season ended.

He also said he had been prompted by the Boston Marathon bombings in April, which killed three people and wounded more than 200.

“I wish I wasn’t the kid in the classroom raising his hand and saying, ‘I’m different,’ said Collins, who played the 2012-13 season with the Boston Celtics and then the Washington Wizards before becoming a free agent.

“If I had my way, someone else would have already done this. Nobody has, which is why I’m raising my hand.” Collins’s signing with the Nets comes just two weeks after Michael Sam, a promising college football player who is expected to be selected in the National Football League’s upcoming draft, came out as gay.

“I’m Michael Sam. I’m a football player and I’m gay,” Sam, a defensive lineman, said in a video posted on the New York Times website. “I just want to own my truth before anyone breaks a story about me.”

Sam, a 6-foot, 2-inch (1.88 meter), 260-pound (118 kg) pass rusher, was named Defensive Player of the Year in the Southeastern Conference (SEC) after leading the SEC with 11.5 sacks and 19 tackles for a loss, and was projected to be mid-round pick in the upcoming seven-round NFL draft.

However, it is Collins and not Sam, as thought after the football player’s announcement, who will become the first openly gay player to compete in one of the four major U.S. men’s professional leagues.