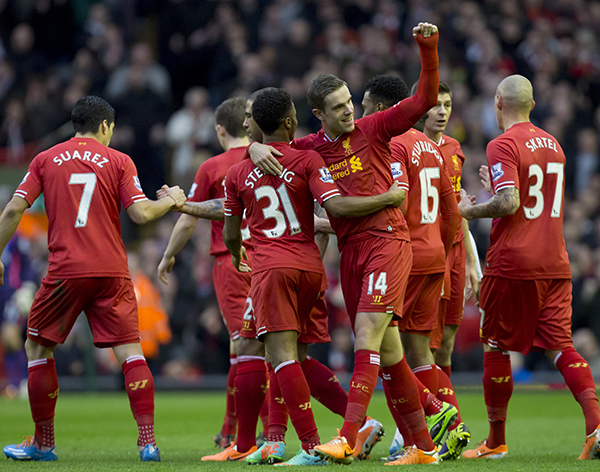 Liverpool’s Jordan Henderson, center right, celebrates with his teammates after scoring against Swansea City at Anfield Stadium on Sunday. Liverpool won, 4-3, staying in the thick of the Premier League title race. [AP/NEWSIS]

England striker Daniel Sturridge scored for the eighth consecutive Premier League match to keep Liverpool in the thick of the title race with a thrilling 4-3 home win over Swansea City on Sunday.

Fourth-place Liverpool is four points behind leaders Chelsea and six points ahead of Tottenham Hotspur, which is fifth after suffering a surprise 1-0 defeat at struggling Norwich City.

Robert Snodgrass eased the pressure on manager Chris Hughton with a second-half goal, hurting Tottenham’s bid to qualify for next season’s Champions League in the process.

Jordan Henderson quickly made it 2-0 before Liverpool veteran Jonjo Shelvey and Wilfried Bony drew Swansea level by the 27th minute.

Sturridge was on target again before the break, only for Bony to equalize once more from the penalty spot.

Henderson clinched the points for Liverpool 16 minutes from time, giving his side 56 points with 11 matches to go.

Arsenal occupies the second spot, one point behind Chelsea. Manchester City is two points back in third place and has a game in hand.

“A wonderful victory for us. Swansea played really well, especially when we were up 2-0 to come back into the game,” Liverpool manager Brendan Rodgers told Sky Sports television.

“It was an outstanding result for us that again typified the character of this team.”

Liverpool struck first when Raheem Sterling took advantage of an Angel Rangel error to send an inch-perfect pass to Sturridge, who skipped past keeper Michel Vorm to score.

After a period of Swansea dominance, Liverpool doubled its advantage through Henderson, who curled a shot into the top corner.

Rodgers’ team may have been expected to push on, but 12th-place Swansea is a tougher nut to crack under new manager Garry Monk and they hit back through Shelvey with a well-taken shot from the edge of the box.

Swansea was level soon after the restart, with Bony grabbing his second from the penalty spot after being pushed by Martin Skrtel.