Nadal puts back injury behind him, rolls to win

Nadal puts back injury behind him, rolls to win 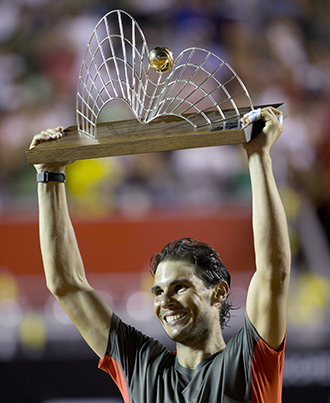 Spain’s Rafael Nadal holds up his trophy after defeating Alexandr Dolgopolov of Ukraine on Sunday at the Rio Open in Brazil. [AP/NEWSIS]

Rafael Nadal returned from a troublesome back injury to win the Rio Open on Sunday, defeating Alexandr Dolgopolov of Ukraine, 6-3, 7-6 (3).

Nadal’s victory comes four weeks after losing the Australian Open final to underdog Stanislas Wawrinka after tweaking his back while warming up.

Nadal, who had to fend off two match points in the semifinal against Pablo Andujar, looked more comfortable in the final and improved his record on clay to 298 wins and 21 losses, the best in the Open Era.

The Spaniard declined to talk about his back, focusing instead on the victory.

“Clearly, it was important for me to get back and win after what happened in the final in Australia,” Nadal said.

He said the heat, the court preparation and the quick balls used in the event made it difficult. He has complained about the fast balls all week.

Nadal has won three times in Brazil and hopes to return next year. He’s also eyeing the 2016 Rio Olympics, where he’d seek a second gold medal. He won gold in 2008 in Beijing.

“I leave with the sensation that Brazil is something special for me,” he said.

The top-ranked Nadal used the Latin American clay-court swing to launch his comeback a year ago from a left knee injury. It went just fine with titles in the French Open and U.S. Open.

He’ll take the same approach this time, hoping injuries don’t slow him heading to the French Open in three months.

Dolgopolov has lost all five matches against Nadal. At center court after the match, he mentioned the near-civil war in Ukraine.

“As you know, there are some troubles in my country,” he told thousands of fans, who applauded in support. “Hopefully there’s going to be peace in my country as I left it a few months ago.”

In the women’s final at the combined ATP-WTA event, Kurumi Nara of Japan beat top-seeded Klara Zakopalova of the Czech Republic, 6-1, 4-6, 6-1 to win her first WTA singles title.

Nara, the 22-year-old Japanese, was seeded fifth in the tournament and is Japan’s top-ranked woman. She prefers to play on hard courts but adapted to the heat and clay in Rio.

“I love Rio,” Nara said, cracking a huge smile. “I can’t believe I won the tournament, but I am very happy.”