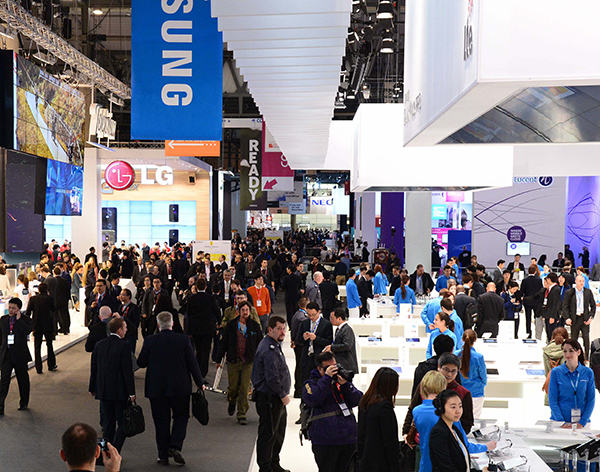 Visitors at Fira Gran Via take a look at booths set up by the world’s leading tech companies as the Mobile World Congress kicks off its official program yesterday in Barcelona. [NEWSIS]

Huawei is young and continues to grow, said Giles, adding that his company will be at the center of discussions on a hyper-connective society.

The company unpacked five smart devices a day before the official opening of the Mobile World Congress. Among the new Huawei products were TalkBand B1, a wristband; MediaPad X1, a 7-inch phablet; and Ascent G6, an LTE smartphone.

MediaPad X1 was highlighted by Huawei CEO Richard Yu as the thinnest tablet in the world at 7.18 millimeters (0.28 inch) thick and weighing 239 grams (0.52 pound) slimmer and lighter than the iPad Mini.

The tablet is priced at 399 euros ($467), which is more expensive than Apple’s iPad and Samsung Electronics’ Galaxy Tab 7.0, hinting at Huawei’s growing confidence in the high-end smart device market.

Huawei begins sales of MediaPad X1 in Europe, but it will also try its luck in the Japanese and Korean markets, Yu said.

Two other Chinese companies - ZTE and Lenovo - also rolled out a flurry of new products, including wearable devices, highlighting their efforts to catch up with Samsung Electronics and LG Electronics.

Some analysts said the Chinese companies are already past the point where they compete only on price and manufacturing capacity. Many of the products they churn out have similar specs to premium products by Samsung and LG.

Chinese companies developed the quad-core processor for mobile devices in 2012, almost the same time as Samsung. Some Chinese companies are known to have Quad HD display technology, which is rumored to be featured on the Galaxy S5. Samsung was expected to unpack the successor to the Galaxy S4 early today Korean time.

Lenovo was expected to unveil an upgrade to LTE Vibe Z. Yesterday it unveiled the S860, an Android phone featuring a 5.3-inch screen.

In the global smartphone market, Huawei has been No. 3 since 2012, according to IHS, a position it lost when Lenovo took over Motorola last month.

Chinese companies are seeking to increase their sales base in emerging markets, which have young and tech-savvy populations yet many 2G phone users.

But they are also trying to expand their footprint in the North America, deemed the world’s most important market.

Samsung and LG are also paying attention to the rapid ascent of China, according to officials of the Korean companies.
Q
“If the last three years were the first great battle of smartphones (for LG Electronics), the present is when Chinese companies have joined a second great battle,” said Park Jong-seok, head of LG Electronics mobile communications, which handles the company’s smartphone business.

Shin Jong-kyun, president of Samsung Electronics Mobile, said he sees the current condition as a crisis phase for Samsung. “In the smartphone market, which has entered the maturity period, double-digit growth is no longer assured,” Shin said yesterday.

Samsung regards wearable devices as a way of keeping Chinese companies at bay. Shin said Samsung is bidding to become a pioneer in the wearable device sector, citing the Samsung Gear 2. Juniper Research has estimated that the global smartwatch market will grow to $19 billion by 2018.

“We plan to show it to the market when we feel we are ready,” said Park.