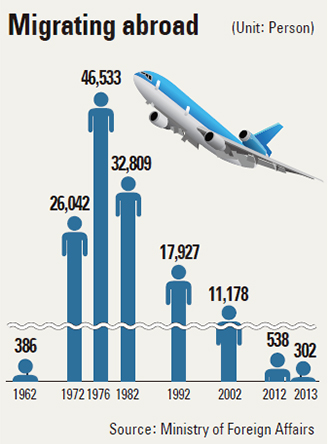 The number of Korean emigrants last year dropped to its lowest point in half a century, according to data by the Ministry of Foreign Affairs, perhaps a telling sign that the nation’s desire to live the “American dream” has waned.

According to government statistics revealed yesterday, the total number of Korean emigrants who went abroad last year stopped at just 302 people, the lowest since the government first began collecting emigration numbers in 1962, when the number of emigrants was 386.

“The American dream is now just an old saying,” said a woman surnamed Lee, 26, who moved to the United States a decade ago and is now preparing to return to her native country. “Now, there are probably more people dreaming the Korean dream.”

Lee said difficulty finding employment after the global economic recession, as well as the headaches involved in renewing her visa each year ultimately prompted her decision to move back to South Korea. And even if she finds employment, she said, based on starting annual salary and living expenses, Korea is simply a better option for her.

“The starting annual salary for college graduates is between $35,000 and $40,000, but nearly 30 percent goes to taxes,” Lee said. “Then, taking into consideration a monthly rent of $1,000, $220 for medical insurance and other living expenses, saving seems like a dream.”

But Lee has another reason she’s planning to come back to Korea: phenomenal medical expenses in the United States.

“I recently got into a car accident and was hospitalized for two days,” she admitted, “but even though I had no major surgery, I was charged $3,000, without even any adequate procedures performed. Because of this, I received surgery in Korea and ended up paying just 400,000 won [$372] for treatment.”

The ministry’s data indicates that, of the Koreans who emigrated to a foreign country last year, 239 headed to the United States, still by far the most popular destination compared to the 23 to Canada, the second-most popular choice, followed by 18 to Australia.

The most popular reasons to move abroad included joining family or relations (57 percent) and employment (34 percent). On the other hand, the number of Koreans returning here has been steadily increasing, from 2,962 in 2003, to 1.4 times as many returning in 2011, at 3,621.

The reason for the decline in Korean emigration are likely due to stricter immigration laws abroad, difficulties in finding employment abroad and difficulty receiving affordable health care and other societal benefits.

“As our economy has developed, there has been a decline in the income gap between Korea and developed nations that were popular immigration destinations,” said a foreign affairs official here in regard to declining emigration numbers.

Also, because of the “global economic recession and a rise in nationalism, it has become more difficult to obtain citizenship or permanent residencies in key developed nations,” the official added.

One example is Canada, which recently decided to scrap a decades-old immigration investor visa program, which enables foreign investors to apply for permanent residency there if they have a minimum net worth of $1.5 million and invested 800,000 Canadian dollars in the form of a multi-year, interest-free loan to the Canadian government.

“Over the past 10 years, the number of inquiries on emigration has decreased sharply,” said Lee Jeong-mi, a consultant with Inolife, an immigration broker company. “It also has partly to do with stricter immigration laws [abroad], which require high English test scores to acquire a visa.”

One 62-year-old man, surnamed Choi, said he recently gave up his plans to move to the United States.

“Because I am not young, there will likely be many cases in which I need to go to the hospital,” he said. “I don’t think I would be able to bear the burden of medical costs in the United States.”