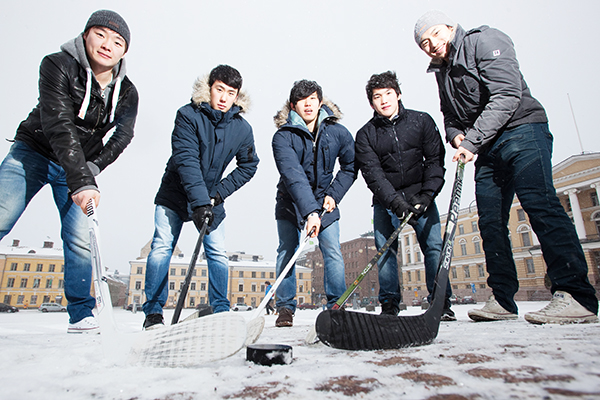 Five Korean ice hockey players play in Finland to train for the 2018 Winter Olympics in Pyeongchang. Provided by the Korea Ice Hockey Association

In every Winter Olympics, the men’s ice hockey gold medal game serves as the grand finale. At the Sochi Games, Canada won the gold, while Sweden took the silver and Finland claimed the bronze.

Not every nation is represented, though. The Olympics accepts only the top 12 countries in the world rankings; this year, there were no Asian teams competing in Sochi. The Korean men’s team is ranked 23rd. But a few Korean hockey players have found hope in Finland, where some rising stars are training under the “Finland Project” to secure a path to the 2018 Pyeongchang Games. Finland has a long ice hockey tradition, and its teams have dominated international competitions. In Sochi, Finland beat the United States to win the bronze medal.

In a bid to prepare Korean players for the Pyeongchang Olympics, Jung Mong-won, the president of the Korea Ice Hockey Association (KIHA), bought 53 percent of the shares and all of the management rights in Kiekko-Vantaa, a second-division Finnish team. Five players - Shin Sang-hoon, Ahn Jung-hyun, Kim Won-joon, Kim Ji-min and Ahn Jin-hui - and possibly more, stand to receive the best training that Finland has to offer.

Shin, 21, is one of the field’s biggest newcomers. He was recruited for Korea’s national team last year, but he passed up the opportunity to earn hundreds of millions of won a year in favor of using his experience in Finland as a stepping-stone for the 2018 Olympics. Another player, Ahn Jung-hyun, 21, has Canadian citizenship. However, he applied to have his Korean citizenship reinstated in order to play for the national team. Kim Ji-min, a permanent resident of Canada, also kept his Korean nationality.

Ahn Jin-hui, 23, was the captain of Korea University’s ice hockey team, but he turned down an offer from Admiral Vladivostok, a team in Russia’s Kontinental Hockey League, to join his Korean colleagues in Finland.

Kiekko-Vantaa may be in the second division, but the team’s skills and competency cannot be underestimated because it competes in the same league as Jokerit, which is in the first division in Helsinki, the country’s capital. Shin has scored 12 goals and has eight assists.

“We have four years until the Pyeongchang Olympics. Four years pass by quickly, so I need to focus more on developing my skills,” said Shin.

“In the Sochi Olympics, none of the Asian countries could participate in ice hockey,” said Ahn. “In Pyeongchang, I hope that Korea could represent Asian countries in showing that we are just as capable as other strong players.”

In a further bid to strengthen the team, the KIHA has granted Korean citizenship to three Canadian players - Brian Young, Michael Swift and Brock Radunske. The International Ice Hockey Federation is also reconsidering whether to revive the system in which the host country’s team automatically qualifies for the Games. That system was abolished after the 2006 Turin Olympics.