Park aims for overhaul of economy with ‘474 Vision’

Park aims for overhaul of economy with ‘474 Vision’ 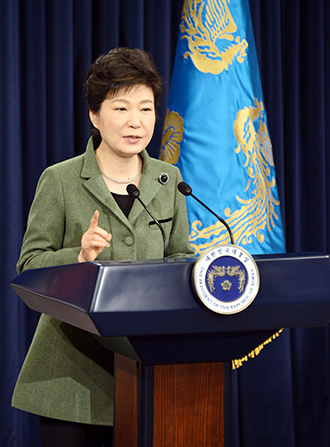 President Park Geun-hye announces details of a three-year plan to change the very nature of the Korean economy at a speech in the Blue House marking the first anniversary of her inauguration as president yesterday. [NEWSIS]

President Park Geun-hye yesterday announced details of a three-year plan designed to change the very nature of the Korean economy by reaching 4 percent annual GDP growth, a 70 percent overall employment rate and $40,000 in per capita income.

The main idea of the “474 vision” is to reform the structure of the economy from public-led to private-led, from manufacturing-focused to service-focused and from export-centered to domestic market-centered. The numerals “474” reference each of the three goals.

The government wants the private sector, especially the service industry, to thrive without excessive government regulations that have squeezed economic growth for the past few years.

“There won’t be a future unless we change our economic nature and abnormal practices, which have long been overlooked, becoming chronic problems,” Park said in a televised speech from the Blue House yesterday.

Three key strategies of the plan are to make Korea’s economic fundamentals robust; to make the economy dynamic and innovative; and to balance exports and domestic sales.

Park cited three necessary tasks for each strategy, proposing a total of nine initiatives for the next three years.

Things to overhaul include public institutions, the manufacturing-oriented economic structure, the export-centered economy, the imbalanced labor market due to discrimination between salaried and irregular workers, the depressed real estate market and growing household debt. 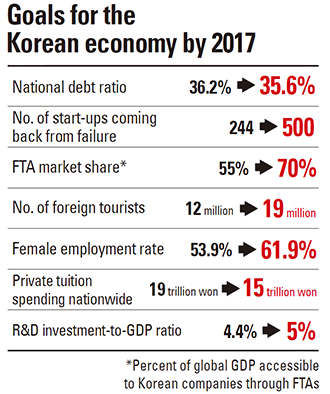 The president put her first emphasis on an overhaul of the public sector. This has been an issue since last year, sparked by corruption scandals in the state-run nuclear energy industry and lax management at public corporations.

“The public sector has seen chronic problems of abnormal practices and low productivity for a long time,” Park said. “A painstaking restructuring and high-level reform will be made to transform the nature of the public sector.”

The reasons why public corporations are such a big problem are because of lax management, high debt ratios and corruption, Park said.

To improve management, every piece of information about public institutions will be disclosed to the public except for core business secrets, according to the plan.

To keep their debt low, the government will limit the total amount of corporate debt issuances.

In order to prevent the central government from forcing costly projects like the four-rivers restoration project onto public institutions, the accounting system for government-led projects and public entities’ projects will be strictly separated.

To boost productivity in the public sector, the president wants to allow competition among public institutions. She specifically mentioned the railroad industry and allowing private companies to participate in the public housing market. She reiterated the importance of establishing a more creative Korean economy.

The government will boost the number of start-ups and small businesses and it plans to foster growth in the service industry, shifting away from an economy dominated by conglomerates and centered on manufacturing.

By 2017, the government will inject 3.9 trillion won ($3.6 billion) into promoting the growth of start-ups. It aims to encourage more than 13,000 entrepreneurs and wants to boost the number of start-ups bouncing back from failure to above 500.

The government will increase its R&D budget for small businesses up to 18 percent. By creating a 20 billion won fund, it will help local start-ups go public on overseas securities markets.

The government also plans to boost investment in the Kosdaq, a securities market for IT start-ups, by operating it independently from the Kospi.

For the domestic side, the government’s goal is to make the service industry competitive enough to create more jobs.

To make tourism, medicine and finance solid growth engines for the economy in the next three years, the government will try to find and repeal unnecessary regulations on both local and foreign businesses and investors. It aims to boost foreign investment to $25 billion by 2017.

Considering that households are refusing to spend due to their high debt levels, the government will help remove three major burdens on consumers: housing costs, household debt and private tuition fees.


Consumers will be able to get more tax deductions for monthly rent from this year. The government plans to reduce the debt-to-disposable income ratio of households by 5 percentage points from the current 164 percent. 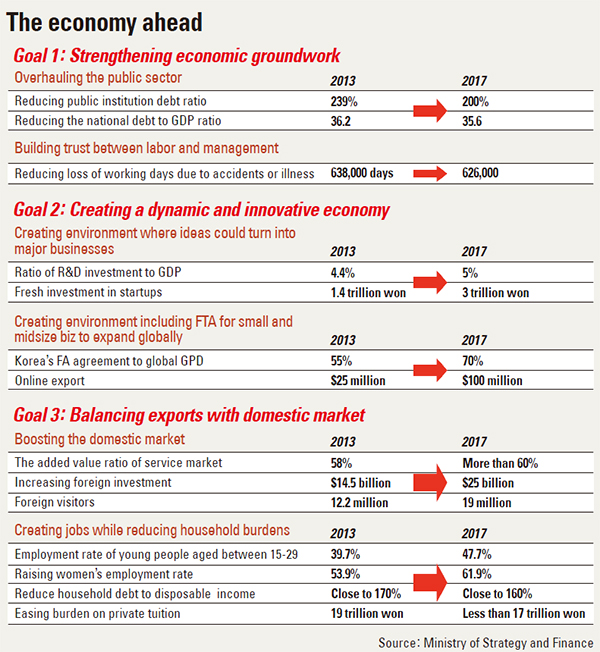 By normalizing the public education sector, the government aims to cut the nation’s total annual spending on private tuition such as cram schools from 19 trillion won to 15 trillion won by 2017.

The business community welcomed the government’s announcement, saying it was timed opportunely considering the economy is showing signs of improved growth.

“We view the government’s plan to ease regulations and boost start-ups to revive the domestic market positively,” said the Korea Chamber of Commerce and Industry in a statement released yesterday.

“In response to the government’s efforts to reform regulations, the business community will help increase investment and create jobs to realize the 474 vision,” said the Federation of Korean Industries in a statement.

Many analysts said the basic direction of the plan seemed right.

“The three-year plan is necessary for the Park government to achieve its 474 vision,” said Oh Jung-geun, a researcher at the Korea Economic Research Institute.

“Economic innovation is essential to raising the country’s potential growth,” he said.

But some questioned the effectiveness of the plan, saying it listed too many tasks without distinct priorities, especially considering its relatively short time frame.

“The plan is too comprehensive to make each goal appropriately enforced in such a short period,” a researcher at a private economic research institute said.

Due to uncertain external conditions and a sluggish domestic market, the government might not be able to carry out any of the plan, he said.

“Three years is too short to reform an economy,” he concluded.