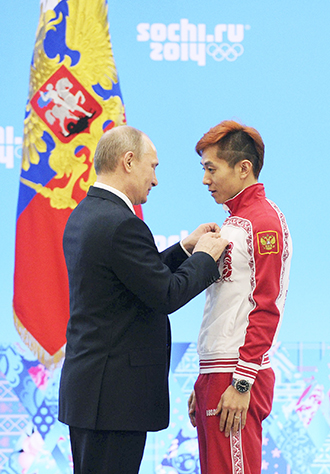 In the history of the Olympics, Ahn Hyun-soo, now Viktor Ahn of Russia, was the first foreign, or Korean athlete who changed nationalities and won a lot of support from Koreans.

Ahn won that support because he left the country after becoming a victim of power struggles within the Korea Skating Union that were rooted in fierce university loyalties. Ahn is a graduate of Korea National Sports University (KNSU), but he was often prevented from competing in international events in 2005 and 2006, when power struggles between coaches were at their peak.

But a deeper look into Ahn’s career shows that he became one of the country’s best skaters in that environment. He also benefited when the national team was ruled by KNSU graduates; in fact, he refused to join the team when a non-KNSU graduate was appointed as the coach in 2005.

What Koreans really should be mad at is the country’s “elite sports” policy, created in the 1970s, which focuses on fostering one or two top players in each sport as part of Korea’s goal to enhance its international prestige.

Frankly, Ahn may be the worst double-edged sword that Korea has created. He was trained to collect as many medals as possible, but he later became a living example of the dark side of Korean athletics.

The power struggles between rival factions in short track began in the 1990s, when Jeon Myung-gyu, the vice president of the skating union, became the short track team’s coach. Jeon is Ahn’s former coach, but Ahn’s father, Ahn Ki-won, said that Jeon prevented his son from skating in Korea when their relationship soured.

Jeon fostered many top skaters, but a conflict arose under his leadership because he directed non-KNSU graduates to sacrifice themselves to protect his KNSU graduates from foreign players during races so his students could win easily.

Jeon resigned from the post in October 2002, when non-KNSU skaters refused to join his team. He was the only coach for both the men and women’s teams, but, after the boycott, each team had its own coach. Kim Ki-hoon, one of Jeon’s students, coached the men’s team, while Lee Joon-ho, a non-KNSU graduate who won a gold medal in the 1992 Games, coached the women’s team. But because Kim and some of the coaches who later replaced Kim and Lee were also Jeon’s students, he was able to maintain his influence over the skating team.

Ahn benefited under this environment. In 2002, when he was 16, Ahn was put on the roster of the national team, despite failing to win one of the five spots in the selection race. There is speculation that Jeon was behind that decision.

But the ugliest scandal in the history of Korean short track occurred when Ahn was the team’s ace skater at the 2005 Winter Universiade in Austria. Ahn’s teammate, Seo Ho-jin, a non-KNSU graduate, demanded that Ahn skate behind him so that he could win the gold medal, but after Ahn refused, Seo beat Ahn for hours. The next day, Ahn stood on the podium with a bruise on his right eye. Seo wanted to win because any athlete who won a gold medal in the universiade would be exempted from the mandatory two-year military service.

That exemption is often considered the most effective tool for motivating athletes to compete harder. In fact, its nickname is “military-roid,” because it produces a performance-enhancing effect that is similar to steroids. Considering that most Korean men join the military between the ages of 20 and 24, an exemption from that duty is a sensitive issue for athletes.

But Ahn didn’t leave Korea because of the power struggles. He just wasn’t able to continue his career in an environment in which one person (Jeon) controls everything. “Jeon is the skating union itself,” Ahn’s father said. “He exercises absolute influence in the union.”

Ahn injured his knees during training in 2008 and underwent surgery three times. Later, Ahn failed to claim a spot in the April 2009 national team selection race. Ahn’s father said Jeon ordered the union to have only one match in April. It used to have two: one in April and the other in October. Because Ahn had long-term rehabilitation, he wasn’t able to perform his best. Ahn’s father said the relationship between Jeon and his son soured when his son joined the Seongnam city government skating team in 2008, instead of going to the KNSU graduate school, which Jeon wanted him to do. Ahn’s father accused Jeon of preventing Ahn from skating in Korea since then. After the Sochi Games, Ahn told media that he wanted to go to a nation that could provide an environment that would allow him to just focus on skating.

“The public is mad at the union because they already have seen similar things in society,” sports analyst Jeong Yoon-soo said. “Many high-ranking government officials have been jailed or accused of abusing their authority or other greedy corruption, like giving a decent job to their children while many youngsters are having a tough life. The government encourages youngsters to be the best, but has failed to create an environment for fair competition.”