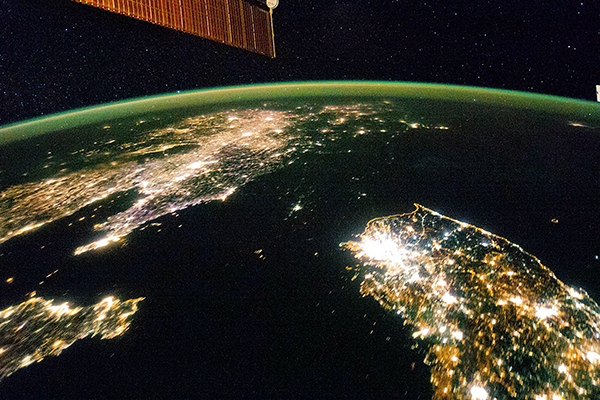 A satellite image released by the National Aeronautics and Space Administration (NASA) yesterday shows a night view of the Korean Peninsula with an almost dark, electricity-poor North Korea, taken by a crew aboard the International Space Station on Jan. 30. [REUTERS/NEWS1]

President Park Geun-hye announced that the government would establish a new body to prepare for unification during a speech to mark the first anniversary of her inauguration, which she gave to the nation yesterday morning.

The speech, which stretched more than 20 pages, was delivered in more than 40 minutes in the presence of ministers, presidential senior secretaries and Blue House correspondents. Park wore a khaki jacket similar to one she wore during the inauguration ceremony a year ago, a gesture symbolizing that she intends to deliver on her inaugural resolutions.

The speech was widely expected to be dominated by details of a three-year economic innovation plan that she first mentioned in a New Year press conference on Jan. 6. Against expectations, Park stressed unification - which she earlier described as a potential “jackpot” - signaling that North Korea has emerged as a key priority for the administration entering its second year.

Her economic plan was described afterward.

“Unification will offer a great stepping-stone for the Korean economy to leapfrog into yet another dimension,” she said. The comment suggested that Park is no longer confining North Korea to the realm of national security and diplomacy but is making it part of a comprehensive vision for South Korea’s future.

Blue House sources said establishing a framework and composition for a unification committee was ordered by the president while she prepared for her first anniversary speech.

The foreign affairs and national security office of the Blue House is in the middle of deciding the size and composition of the committee.

In her speech, Park said the committee will have experts in various fields, including in diplomacy, security, economics, society and culture.

“We welcome a body that discusses measures to prepare for unification and reduce conflict regardless of whether the members are conservative or liberal,” said Woo Sang-ho, an opposition Democratic Party lawmaker, who is a member of the diplomacy and unification committee of the National Assembly. “But we need to be clear about separating the committee’s role from that of the Unification Ministry.”

Park wrapped up the event without taking questions from the press and headed directly to the State Reception House, or Yeongbingwan, inside the Blue House to preside over a fourth economic advisory meeting and an economy-related ministerial meeting.

After the meeting, a simple 10-minute ceremony marking her first anniversary in office took place just before noon. Some 80 government officials, including 20 Blue House employees, greeted the president with applause and presented her with a memorial tablet, a framed message and a bouquet. The tablet read, “We will devote every passion to help the Park Geun-hye administration achieve the second Miracle on the Han River and open an era of happiness.” It was signed by nine senior presidential secretaries and the head of the Office of National Security.

The frame contained a sheet of paper on which Blue House workers wrote messages cheering the president on.