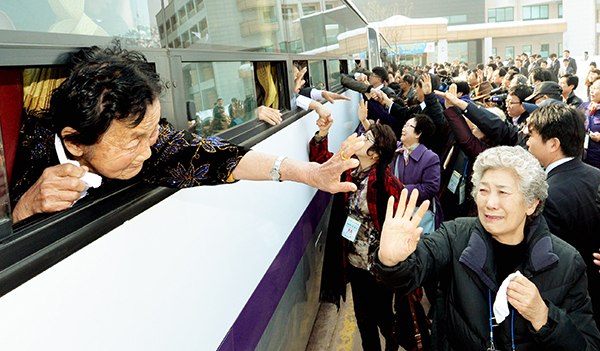 A South Korean woman, right, bids a tearful farewell to her sister-in-law from North Korea, left, on a bus, as she prepares to return home from a three-day reunion of war-separated families at Mount Kumgang resort, North Korea, yesterday. As the chances that the families will see their kin again are slim, South Korea is calling to make the reunions a regular event. About half of the separated family members are in their 90s. [NEWSIS]

The incident follows the start of South Korea-U.S. joint military drills, which kicked off Monday.

Drawn up by the UN Command after the 1950-53 Korean War, the line is regarded as a de facto maritime border by South Korea, but North Korea has frequently tested its effectiveness.

During the episode, the ship moved 4 kilometers (2.4 miles) below the NLL, 23.4 kilometers west from Yeonpyeong Island, a frontline island for South Korea, the spokesman said. The first crossing happened at 10:56 p.m., followed by another at 11:46 p.m., with the third at 12:25 a.m. yesterday.

The 420-ton ship was in South Korean waters for 20 or 30 minutes during the first and second crossing, and it stayed longer in its third transgression for about two hours.

“The ship slowly returned to the North at around 2:25 a.m., in a zigzag path, following an immediate and strong warning by our military,” Kim said. “We broadcast warnings 10 times.”

Asked why the South Korean military only issued warnings and did not fire shots while the ship was in Southern waters for more than two hours, the spokesman said that the military could have taken strong measures but that the ship quickly returned after the warnings were issued.

“We could have taken additional measures when North Korea came two miles farther from the NLL,” Kim said. “We would do that if the ship kept moving to the South, but it returned to the North after our warning.”

Due to a thick fog over the sea, the South Korean military was only able to determine the weight of the ship via a laser detector, Kim said.

The spokesman called the violation of the western maritime border “a deliberate invasion.”

“It is an intentional provocation by North Korea,” he said. “Their purpose could be to nullify the NLL and test the responses of our military as a veiled attempt in the name of their own military exercises or patrol.”

The incident came after annual joint military drills between South Korea and the United States began Monday. About 12,700 U.S. forces and 200,000 South Korean forces are participating in those exercises.

North Korea has consistently complained about the routine drills, calling them “a war rehearsal bound for Pyongyang.” The allies have maintained, however, that the drills are defensive in nature.

It has been six months since a North Korean patrol ship crossed into South Korean waters by violating the NLL, the South Korean military said.

And despite heightened tensions on the Korean Peninsula, reunions between the two Koreas for war-torn families ended yesterday as scheduled.