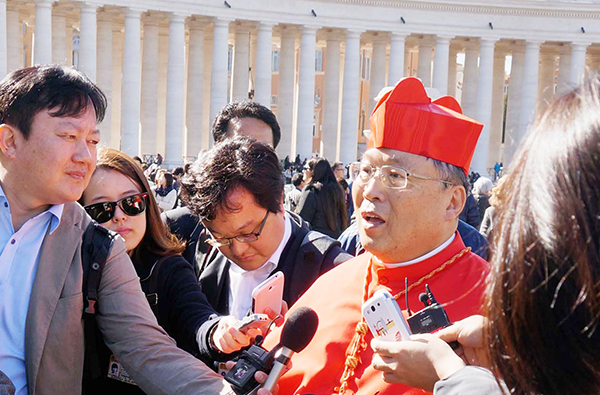 Cardinal Andrew Yeom Soo-jung speaks in an interview with Korean reporters on Sunday at St. Peter’s Square in the Vatican. [NEWSIS]

ROME - When Andrew Yeom Soo-jung heard from the Vatican that Pope Francis was going to elevate him from an archbishop to a Roman Catholic cardinal, he admitted he was more apprehensive than excited.

“A lot of Koreans seemed to be pleased to hear about my appointment,” he said in a press conference Monday afternoon local time in Rome to mark his promotion there on Saturday. “It’s not that I wasn’t truly pleased, but I wasn’t sure if I could do [the job] well and I thought I have to do better.”

“The duty of a cardinal is to help the Pope well, carry out the pastoral role and to be the link [between the Pope and believers]. I wish to become a person who can devote myself to God and to those loving God … I will pray for myself, and please pray for me,” he continued.

The 71-year-old cardinal also expressed hope that Pope Francis would visit Korea. Korea issued an invitation to the Vatican, and it appears highly likely the Pope will come in August or October - 20 years after Pope John Paul II last stepped foot on the Korean Peninsula.

“I wish and pray that the Pope will visit Korea. [Should he come], it will be a great joy for both Koreans and Asians,” Yeom said. “Pope Francis disposes of all the formalities, even skipping the lunch with the new College of Cardinals, which used to be a routine in the past. The group of Korean bishops proposed earlier that the Pope come not in August, but the last week of October.”

Known to be keenly interested in the families separated during the 1950-53 Korean War, Cardinal Yeom mentioned the issue during the cardinals’ meeting at the Vatican.

“There are so many people suffering the pain of being forced to part with their loved ones. Sympathizing with those families and resolving the problem together is what I am supposed to do,” he said.

As part of those efforts, he visited the Community of Sant’Egidio, a Catholic organization in Rome made up of ordinary believers devoted to serving the poor, earlier on Monday. The community is set to visit North Korea next month.

Cardinal Yeom mentioned during a Mass for Koreans in the Vatican that he had been asked by many people, including other cardinals, in recent days if he was happy.

“Nothing seems to be so simple, from putting on multiple layers of the cassock [an item of clerical clothing] to taking part in the ceremony to become a member of the College of Cardinals,” he said, suggesting that he avoided giving a direct answer.

But at the same time, he stressed that Feb. 22 - the day of his elevation - coincided with the day Saint Peter, who was born as Simon, was renamed and appointed as the first Pope by Jesus Christ.

“Simon was happy to meet the living son of God and to confess it,” the cardinal said. “We should be happy people to be encountering Jesus in everyday life and to be confessing it.”