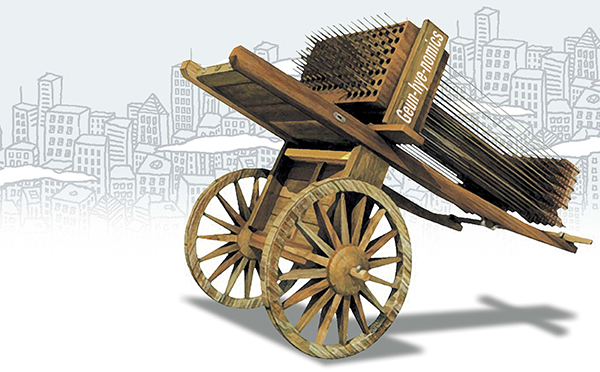 Last summer, the Japanese were euphoric over so-called Abenomics, a kind of economic panacea whipped up by leader Shinzo Abe to dispel the deflationary malaise that weighed down the Japanese economy for the past two decades. It was a three-pronged approach to stimulate the economy through monetary and fiscal policies such as limitless liquidity supplies and an artificial depreciation of the yen, which was to be followed by structural reforms of the Japanese economy. Abe replaced the central bank governor with someone supportive of his desire for quantitative easing of unprecedented proportions. Regardless of the fact that Japan has one of the world’s highest fiscal deficits, he increased government spending on extensive pork-barrel projects.

In the context of monetary and fiscal stimuli, he fired off two of the three arrows in the quiver called Abenomics to revive the economy and has appeared to have hit the bull’s eye twice. The yen fell nearly 30 percent against the U.S. dollar and stock prices shot up on expectations of an economic recovery. The lethargic real estate market began to show life and growth targets were upgraded. Abe enjoyed popularity unseen among recent Japanese leaders.

Korean President Park Geun-hye, who entered office a few months later, stumbled from the beginning with appointment fiascos and scandals involving her aides. Her presidential transition committee’s economic vision was sloppy and contradictory. Its slogan about building a so-called creative economy was vague. Its pledges to boost jobs, increase welfare benefits, democratize economic norms and practices, revitalize corporate investment, ease regulations and establish fair competition lacked coherence and coordination. It was a wish list without any underlying philosophy or vision. Some even sneered that the government should imitate Japan and come up with its own “Geun-hye-nomics.”

As she approached her second year in office, Park announced in a New Year’s address a grandiose plan to overhaul the economy with a three-year plan. After wasting a year, the government finally trotted out a framework for economic policy. It was nothing new - recycled promises to reform public enterprises, build a creative economy and reinvigorate domestic demand.

But it was a development from the previous approach, as it contained detailed growth targets and a genuine will to fix the economy. Park polished up the plan with more details in a statement released Feb. 25 commemorating the anniversary of her first year in office. The government will “normalize the abnormal” to rebuild the country’s economic foundation, rejuvenate the economy through innovation and creativity, and bolster domestic demand through deregulation and liberalization for the goal of balanced growth. The government set the right direction to fix structural problems that had been eating away at the country’s growth potential and place the economy back on a sustainable growth path. The president promised that these commitments will be made during her term. Seoul’s economic policy has finally taken shape.

In Tokyo, Abenomics has lost much of its early steam. The economy has moved out of deflation because import prices fell thanks to a weaker yen. But exports have not picked up as expected. Financial instabilities in emerging markets from the winding down of the massive quantitative easing by the U.S. Federal Reserve wiped out the gains from the weakened yen. The two arrows of fiscal and monetary stimulus have already shot off. Their effects are wearing off before Tokyo can shoot off the third and final arrow - structural reforms - which was always going to be the hard part of Abenomics.

The first two arrows of spending and weakening the yen were emergency actions to artificially inflate assets and build up confidence in the economy. The third arrow was supposed to provide a long-term cure to fundamentally change the economy’s structure. It was bound to be painful and resisted. Abenomics has hit a bottleneck. The government was slow to deregulate and never even got around to labor reform. A hike in consumption tax in April to improve the fiscal position may also throw a tsunami of frigid water on the fledgling economic recovery.

The economic policy of Korea does not have any short-term stimulus actions through fiscal and monetary tools. All policy targets are aimed at expediting structural reforms to upgrade the economy. Reforms in public enterprises, public finance, taxation and labor markets would improve the economic base. Re-orientation toward creativity and innovation could change the paradigm of economic activities. Deregulation and liberalization could retool the domestic and services sector market as new engines for growth. The approach is entirely different from Abenomics, which prioritized short-term stimulus and delayed structural overhauls.

What matters are actions. Debating a prescription is not important; how it works on the patient is. None of the policy goals of the three-year plan will be easy. Reforms in public institutions and the labor market will be challenged. Deregulations will face resistance from mainstream industry. Abenomics has petered out before the hard part of structural reforms. The Korean government is out to do the hard part first. It will all depend on the will of the president.