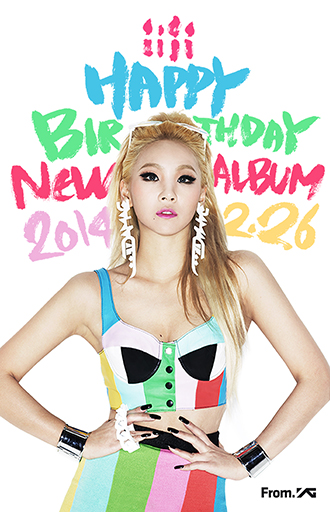 With the hype building around 2NE1’s latest release - due to drop in the early morning hours today - YG Entertainment took a moment to send a congratulatory birthday message to CL, the group’s leader.

CL, whose real name is Lee Chae-rin, turned 23 yesterday, so her agency posted a photo of her wearing a colorful outfit and makeup, along with the words “Happy Birthday New Album.”

2NE1’s second full-length album, titled “Crush,” was previously set for release on the same day as CL’s birthday. The album’s title track was composed and written by CL, as were “Want You to Live” and “Baby I Miss You.”

Earlier in the week, the four members of the leading girl group released teaser images of Park Sandara and Gong Min-ji on Monday and CL and Park Bom on Tuesday.

Korea’s other top girl group, Girls’ Generation, released its latest song, “Mr. Mr.,” Monday, which topped most of Korea’s online music charts. With both groups poised to go head-to-head, music industry observers and fans are eagerly anticipating who will win the matchup.