So-you shines on her own

So-you shines on her own 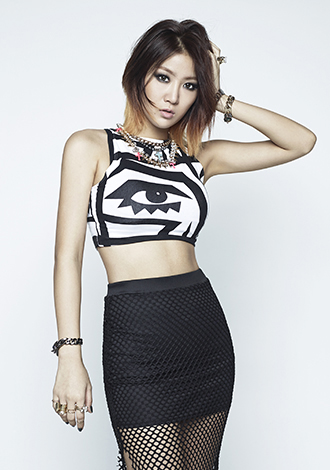 She may have been the last member to join Sistar, but she certainly is not the least when it comes to popularity.

So-you, whose real name is Kang Ji-hyun, has been called the “queen of collaborations.” Last year, her song “Stupid in Love,” a duet with the underground rapper Mad Clown, reached No. 1 on many charts.

Her latest single, “Some,” was recorded with Junggigo, and since it was released on Jan. 7, the song has pretty much ruled Korea’s singles charts.

The 22-year-old singer recently sat down with Ilgan Sports, an affiliate of the JoongAng Daily, to talk about her thoughts on her recent successes.

Q. Did you expect “Some” would do this well?

A. I didn’t expect it to reach first place because “Let It Go” from Disney’s “Frozen” was such a strong player in the charts. We released our song at noon and it instantly soared up to the top spot.

Do you feel more responsibility when you are not with your Sistar members?

Of course. When I am on stage with Sistar, I feel kind of relieved thinking that the other members can back me up. Like Hyo-rin, she sings so well. But when I am doing a collaboration, I feel more pressure, and when the songs do well, the pressure gets bigger.

Before joining Sistar, you were a trainee for another girl group, 4Minute. What would it have been like if you had debuted with 4Minute?

I think that would have suited me well, too. I was actually the first trainee at Cube Entertainment [the agency of 4Minute], with Ga-yoon. I thought I would debut as a female duo with her, but when the agency started to formulate 4Minute, I dropped out and transferred to Starship Entertainment, where I debuted a year later in Sistar. It would be a lie if I said I had nothing against it, but, you know, the present is the most important thing.

Did you feel that you lacked some kind of identity within Sistar because you were last to join?

I was kind of caught in the middle with Hyo-rin singing so well, Bo-ra appearing in variety shows and Da-som acting in dramas. When my agency asked me, “What do you want to do?” I thought to myself, “What am I supposed to do?” But I think everyone has their own timing, and I think mine came when I was featured in the Geeks’ song “Officially Missing You, Too” in 2012.

There are rumors about some discordance in your group. Is that true?

I think the rumor started because I don’t talk much on stage at awards ceremonies. But since I am last in the speaking order, there is not much left to say for me except “Thank you” or “I will do my best.” Also, when four girls live together, there has to be some quarreling here and there. But, like we’ve shown on TV, all four of us are very easy-going, so we speak directly when we are not happy with something and resolve it right away.

Is it true that you started saving to buy a house with your first paycheck?

[Laughs] Yes. You never know what’s going to happen in the future. I am used to earning my own spending money from many part-time jobs when I was young. I even obtained a cosmetology license when I was in the 8th grade. So, when I get paid, I go straight to the bank to consult about my saving plans and banking options.

What is your goal this year?

To let more people know about So-you, as well as Sistar. If time allows, I want to earn a barista license, too.