No black-and-white answers in flap over photo

No black-and-white answers in flap over photo 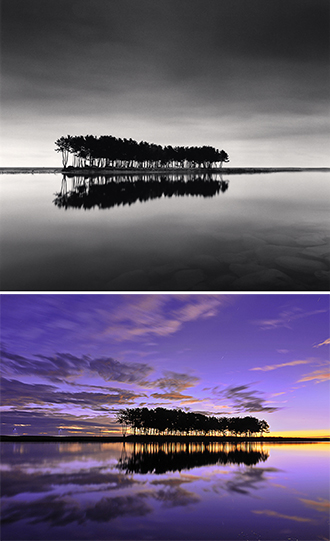 Two similar-looking photographs of a small Korean island - one in black and white and one in color - were shown to three judges on Tuesday at Seoul Central District Court.

“Compare the two photographs,” said lawyer Cho Sang-gyu. “They are almost identical photographs of Solseom (Sol Island) in Samcheok, Gangwon. One was taken by a renowned photographer, Michael Kenna, and the other was taken by an amateur photographer three years later, which Korean Air used in its television commercial.”

The photos are at the center of a copyright infringement lawsuit filed in July by Gallery Kong, a Korean agency that represents Kenna, against Korean Air for “willfully and unfairly using Kenna’s reputation.”

Among Korean photographers and the public, the central issue is this: When someone takes a landscape photograph at the same location using the same angle to portray a similar composition as a famous photograph, is that copyright infringement?

The last arguments in the trial took place Tuesday afternoon. A final ruling is set to be issued on March 27.

Kenna gained fame in Korea for “Pine Trees,” which portrays a small island originally called “Sok-seom.” Due to Kenna’s photograph, which was named “Solseom” in Korean (sol means pine and seom means island), the island has been referred to as Solseom instead of its original name.

After his photograph was published in 2007, the Korea Gas Corporation ended its plan to cut down pine trees on the island, which was scheduled to be turned into a liquefied natural gas production base. The forgotten island also began to attract visitors, although some were disappointed by the real scenery.

Kenna won praise for the photo’s angle and its composition, and numerous amateur photographers tried to imitate his techniques to achieve a similar portrayal of the island. But it’s hard to say that those amateur photographers or anyone else who has taken photographs of Solseom is guilty of copyright infringement.

After criticism that “Kenna should not claim exclusive rights to Solseom,” the photographer expressed perplexity and said such assertions are “absolute nonsense.”

“It seems there is some confusion in the photographic community regarding my court case with Korea Air,” Kenna said in a statement. “I would like to state as clearly as possible that I completely defend the rights of all photographers to photograph whatever they want to. Some people are saying that I do not want anybody else to photograph the pine trees on Sol Island. This is absolute nonsense and completely incorrect. I love that Sol Island is now so well known and many photographers go there. The amateur photographer’s image that Korean Air used in their television advertisement is really quite beautiful and I congratulate him.”

Kenna added that his disagreement is not with the amateur photographer, but Korean Air.

“I believe they willfully and unfairly used my reputation and goodwill by advertising on national TV an almost exact replica of my existing image,” Kenna said.

Amateur photographer Kim Seong-pil, who works for a local travel agency, submitted his photograph to an annual landscape photography competition organized by Korean Air in 2010. Although he failed to win the top awards, Kim received two round-trip domestic tickets as a prize and turned over the ownership of his photograph to the airline company. Then, Korean Air produced a series of television advertisements in August 2011, which included Kim’s photograph of the island. Later versions of the ad series included photos from other prize winners in the same competition.

Kenna said what bothered him is that the Korean Air ad labeled the title of the photograph as “Solseom,” which is the title of his photograph, rather than using the title that the amateur photographer had used, which is “Wolcheon-ri - Waiting for Morning.”

“There were no licensing fees or financial compensation paid either to the amateur photographer or to me,” said Kenna. “I am just a photographer, an artist, and I have no interest in fighting this large corporation. I feel like David battling against Goliath. However, I do feel demeaned and insulted by how Korean Air has behaved, and I believe I have a moral duty to stand up and set an example so that other professional photographers are not taken advantage of in the same manner.”

Usually, legal battles concerning copyright infringements of photographs involve a duplicated copy being used without consent from the original artist. However, the issue with Kenna’s “Pine Trees” is not that simple.

After the copyright infringement issue arose, Kim wrote in his blog last month that he “knew about Michael Kenna’s photography.”

However, Kim said, “It’s difficult to accept allegations that [my photograph] is a copyright infringement because landscape photographs differ, depending on the time and day of the shoot as well as the surrounding environment.”

Kim added, “If you go to Solseom, you’ll know. Even beginner photographers will have similar compositions. The map service at portal sites even show a similar angle. Moreover, Kenna’s photographs are centered on the island of pine trees and expresses stillness, and are somewhat elegant. But I tried to express the island during the colorful sunrise. That’s why I included clouds, so that it looks dynamic. The concepts [between me and Kenna] are clearly different.”

Kong Geun-hye, the director of Gallery Kong and the plaintiff in the lawsuit, said she has no intention of holding Kim responsible for this case.

“I am aware that many photographers take pictures of the island. I don’t have any problem with that,” said Kong. “We are not trying to assert the rights to Solseom. We believe it’s a problem that a large conglomerate like Korean Air has used imitations of Kenna’s photographs commercially without proper attribution when they were aware of the existence of Kenna’s ‘Solseom.’?”

Kong added, “However, it would’ve been better if the amateur photographer had mentioned that it’s an ‘homage to Kenna’ or ‘after Kenna,’ as he said that he knew about Kenna’s work before taking the photograph.”

Kong said she decided to file the lawsuit “to set an example and raise awareness of copyright infringement in photography, which seems to be very lacking among Koreans.”

Korean Air denies the allegations made by Kenna and Gallery Kong, saying that “as a leading global airline, Korean Air is leading the observance of copyright laws.”

“Korean Air has the copyright to the photograph [by Kim] as it’s been submitted through a travel photograph competition organized by the company,” said Jang. “Therefore, it’s not a problem whether we’ve used it commercially or not. We didn’t even consider whether the photograph was infringing a copyright or not because we see it as totally different photographs.”

The airline company also emphasized that, “Korean Air uses about 850 million won a year [about $797,000] to pay rightful fees to copyright owners to produce advertisements,” and that it’s “absurd” to say that the company used an amateur photographer’s work to avoid paying proper fees.

According to the Supreme Court, “copyrights in photographs is acknowledged when the photographer’s personality and creativity is included in the process of selecting a subject, the composition, angle of the camera, direction and the amount of light as well as shutter speed and finally the process of printing.”

Experts have been analyzing the two photographs by comparing the similarities and differences.

Kim Seung-gon, a photography professor at Sunchun National University, told JTBC, an affiliate of the Korea JoongAng Daily, “Kenna’s photograph is a square, while Kim’s photograph is rectangular. Moreover, Kim’s is in color, while Kenna’s is in black and white. Moreover, there are technical differences as well. Just because the two photographs share a similar composition, it’s difficult to say one plagiarized the other.”

Korean Air also argued that the current copyright infringement law in photography states that “the law protects the expression, not the idea itself,” and said that “Kenna may have come up with the idea first, but the two photographers’ expressions are totally different.”

However, Kong argues that fine art photographs “should not be analyzed based solely on format” and insisted that the photographer’s “ingenious skills and concept should be valued.”

“In the photograph, the pine trees, the sky and water are in balance through the reflection of pine trees. Coming up with such a composition is not easy and it’s crucial to this ‘artwork.’ It’s Kenna’s ingenious technique of expression that has maximized the beauty of Solseom.”

European photographers, on the other hand, are standing up for Kenna.

French photography critic Jean-Charles Jambon told JTBC that “the two photographs are too similar. This photograph [Kenna’s] has intellectual property rights and it should be protected. … The angle is the same and even the reflection looks the same.”

A Dutch photographer surnamed Van den Houte said, “I think without Michael Kenna, there would be no image. The image that Korean Air would use would be a totally different image.”

Although the opinions of experts are deeply divided, photographer Jeon Myeong-jin says one consolation is that the incident “raised alarm among Korean photographers and the public about copyright infringements and how conglomerates deal with such an issue.”

Jeon, who shoots landscapes, architecture and portraits, said there’s a double-sidedness in photography and that this case “seems to reveal such a characteristic clearly.”

Jeon has met Kenna many times because Kenna is a close friend of photographer Kim Joong-man, whose career Jeon followed for many years. Jeon said he believes “Kenna is not a person who will make such matters [like claiming the rights to the island] an issue and I believe he is not trying to claim the rights to the island, but trying to protect his rights against a conglomerate.”

“Photography is a genre of art that is so vulnerable to the issue of copyright infringement. In Korea, people take too lightly [the issue] of using photographs. Some even argue whether photography should be considered a creation,” said Jeon.