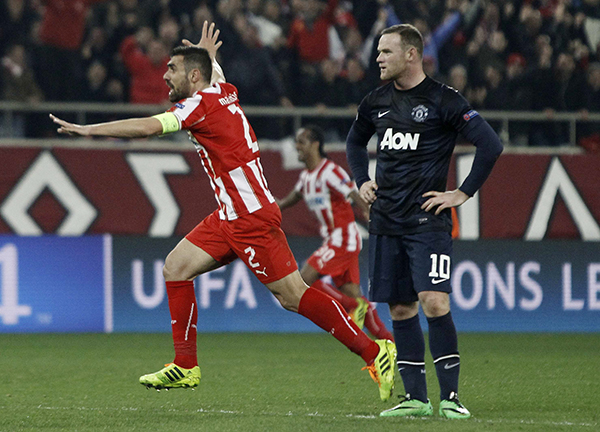 Manchester United’s dwindling hopes of lifting a trophy this season are dangling by a thread after it produced an abject display to lose, 2-0, at Olympiakos Piraeus in a Champions League last-16 first leg on Tuesday.

Alejandro Dominguez opened the scoring with a clever first-half flick and Arsenal loanee Joel Campbell added a sublime second goal to leave United facing a huge task to overturn the deficit in the return match at Old Trafford on March 19.

“That’s the worst we’ve played in Europe. We didn’t deserve to get anything,” United manager David Moyes said.

“I’m surprised, I didn’t see that level of performance coming. I take responsibility, we have to play better. The players are hurting.”

Defeat at the Georgios Karaiskakis Stadium represented yet another body blow in an inauspicious campaign for last season’s English Premier League title winners.

United is out of the FA Cup and the League Cup and trails Premier League leaders Chelsea by 15 points with 11 games left to play.

Moyes’s men looked sluggish and disjointed against an inexperienced Olympiakos side that is bidding to reach the quarterfinals for only the second time in its history.

It was the first time the Greeks had beaten United in five attempts.

“To beat a great side like United, the way we did, is something very special and I can’t hide the joy and pride I feel for my players,” said Olympiakos coach Michel.

“We picked the best moment to show Greek football is alive and kicking,” added the former Spain and Real Madrid striker.

Moyes opted to start with two wingers, Antonio Valencia and Ashley Young, but neither made an impact in a first half in which the runaway Greek league leaders displayed real energy and hunger.

After a cautious opening from both sides amid ear-splitting noise from an enthusiastic home crowd, the first chance fell to Olympiakos as Dominguez burst through the middle on a solo run only to be denied by a last-ditch tackle from Nemanja Vidic.

Midfielder Tom Cleverley registered United’s only effort of note in the first half with a 17th-minute half-volley that sailed high over the bar.

Strike pair Wayne Rooney and Robin van Persie were peripheral figures for the visitors as potshots on goal from Giannis Maniatis and Hernan Perez lifted the home supporters.

Patrice Evra’s half-hearted clearance from a corner landed at the feet of Maniatis 25 meters out and his tame, low shot was expertly diverted past keeper David de Gea by Dominguez’s flick.

Campbell, who is likely to star for Costa Rica against Group D rivals England at the World Cup in Brazil in June, did the damage.

He picked up possession 25 meters out, slipped past midfielder Michael Carrick and sent a curling left-foot shot past defender Rio Ferdinand and into the bottom corner of the net.