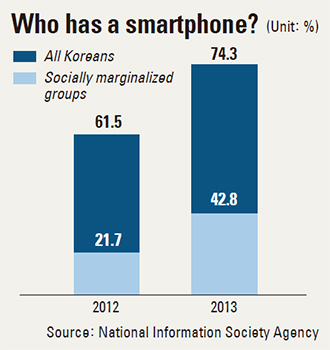 The government said a digital divide between social classes needs to be bridged by supporting people in socially marginalized groups.

The Ministry of Science, ICT and Future Planning said it will start disseminating used smart devices such as smartphones and tablet PCs to people in those groups this year. It will provide free education to keep them from falling behind in digital savviness.

This will also allow them to eventually be employed or start their own businesses in digital-related areas.

The Ministry of Science, ICT and Future Planning and the National Information Society Agency (NIA) yesterday released a study on access to the Internet using computer and smart devices.

Data was collected from 17,500 people from four socially disadvantaged groups - people with disabilities, low-income families, residents of rural regions and senior citizens - and from two additional groups, North Korean defectors and immigrants who have come to Korea for marriages.

In terms of access to smart devices and the ability to use them, the four groups had an aggregate score of 47.5 points if the general population’s score is held at 100 points.

Since the smartphone boom hit the nation in 2010, smartphone ownership has risen among disadvantaged groups. About 43 percent of people in socially marginalized groups owned smartphones last year, up 21 percentage points from the previous year. In comparison, about 74 percent of the total population owned a smartphone during the same period.

Those disadvantaged groups recorded an aggregate score of 75.2 percent in access to and capability of using PCs; about 30 percentage points higher than data from 2004.

By specific group, people with disabilities were the most familiar with IT devices and skills, while rural regions’ residents were the least.

North Korean defectors showed lower possession and mobile skills than rural residents, while marriage immigrants showed slightly better than both. Whether the government’s effort to disseminate used smartphones will bridge the digital divide remains to be seen. A big stumbling block is who will pay telephone bills for smart devices for the disadvantaged.

“We had this strategy planned out, but we’re not sure when this can fully go into effect due to the mobile service subscription fee, which no one has figured out how to deal with,” an official from the ministry said.