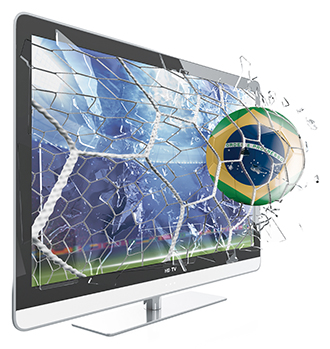 The World Cup in Brazil is coming up in June and the Asian Games kick off in September in Incheon, Gyeonggi, and television manufacturers are hoping to be major beneficiaries.

They think the games will give countless husbands the world over an excuse to go out to the store for a bigger and better TV set.

But some markets will be hotter than others.

Industry analysts note that, in the summer of 2012, sales of televisions in Germany soared ahead of two big events: the Union of European Football Associations Champions League, known as the Euro 2012, and the London Olympics.

Sales of televisions in Germany from January to May of that year jumped 30 percent compared to the previous year.

The most popular TVs had screens larger than 40 inches and digital satellite broadcasting receivers that could receive satellite, terrestrial and antenna signals. Analysts note that sales that year surged because the industry was undergoing a transition from tube televisions to flat-screens TVs.

Analysts say Korean manufacturers should target countries based on the products they are most competitive at.

This year, major television manufacturers, including Samsung, LG and Sony, have chosen Brazil as a particularly ripe target. The number of households is large and many of them are ready to move from tube televisions to flat screens.

According to industry sources, sales of tube televisions in Brazil from January to April last year dropped 35 percent compared to the previous year, while sales of flat screens jumped 30 percent over the same period.

Korean television makers see much more promise in Brazil than in China.

“The industry in China has turned into a red ocean with local brands offering consumers low-priced products,” said an industry source. “But in Brazil there’s a high level of loyalty for Korean brands. The country is the most promising market for Korean producers among developing countries.”

The loyalty Brazilians have for Korean television manufacturers is based on past efforts by companies like Samsung and LG.

“Samsung and LG have been actively sponsoring European premier football teams like Chelsea FC and Leverkusen as part of a marketing strategy to enhance brand loyalty among Brazilians, who have a special affection for football,” the source said.

“National football players like Oscar David or Luis Hernandez are members of Chelsea FC,” said Victor Nunez, 31, who lives in San Paulo. “They wear uniforms with the Samsung logo on their chests when playing. Brazilian people tend to view Samsung more favorably for this reason.”

In 2016, the summer Olympics will be held in Rio de Janeiro, so the Brazilian market should be buoyant for several years.

“Many Brazilian households are also looking for second televisions at home before the World Cup to watch different matches being broadcast at the same time,” said another industry official.

Sports events not only boost demand for televisions in homes but also in commercial areas like restaurants and cafes and in hospitals. Samsung, LG and Sony are making strategic moves by setting up separate departments exclusively for the Latin American market.

“We have categorized Brazil into different regions and figured out the number of hotels and hospitals in each region,” said an official from Samsung. “This is part of a strategy to pinpoint potential demand.”

Sony is on track to place large-screen televisions not only in hotels and restaurants but also in VIP lounges at the World Cup stadium.

Before the London Olympics and Euro 2012, Samsung Electronics and LG Electronics increased their television production for overseas markets and expanded their number of hires that year.

As for now, however, Samsung said it has no specific plans to increase its production, “although the volume could change,” a spokesman said.