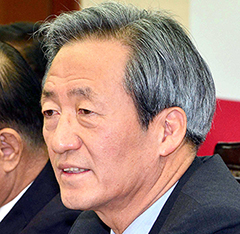 Representative Chung Mong-joon of the ruling Saenuri Party said yesterday that he would officially announce on Sunday his plan to run in the Seoul mayoral race in the local elections.

“Now the agonizing is over and the happiness is just beginning,” he said with a smile at a party meeting in Yeouido, western Seoul.

The former presidential candidate and seven-term lawmaker said he would publicly declare his campaign at 2 p.m. in front of the statue of Kim Gu, one of the founders of the Republic of Korea, at Baekbeom Square on Mount Namsan.

“Seoul nowadays is somewhat digressing,” he told reporters on a separate occasion yesterday. “The central and local governments should join forces to improve the housing environment.”

Transportation policies should also be included with the housing issue, he added.

Chung is set to officially kick off his participation in the most attention-grabbing race of the upcoming elections against incumbent Democratic Mayor Park Won-soon. The third contender will be nominated by the New Political Vision Party, set to be launched by independent lawmaker Ahn Cheol-soo next month.

At least for now, Chung, the former chairman of Hyundai Heavy Industries, appears to have the highest chance of winning. According to a nationwide poll of 800 people on Tuesday by MBC, one of three major broadcasting stations, Chung had an approval rating of 41.3 percent, with Park’s standing at just 35 percent.

But despite his evident popularity, before becoming an official mayoral candidate within the Saenuri Party, Chung must still beat out two other candidates who are said to be bracing to run for the prestigious post, which many claim is a path that leads directly to the Blue House.

Saenuri Representative Lee Hye-hoon, a supreme council member, officially declared on Feb. 11 her willingness to join the race and has already registered herself as a preliminary candidate, marking her ambition to become the first female mayor of Seoul.

Former Prime Minister Kim Hwang-sik, now in the United States, has advanced the date of his return from early April to around March 10, raising speculation that he will declare his intention to run in the race soon.

Political analysts have speculated that if Chung becomes Seoul mayor, his career trajectory would likely stretch toward the presidency.

A native of Busan, Chung is the sixth son of Hyundai founder Chung Ju-young, who also challenged Kim Young-sam and Kim Dae-jung for the presidency in 1992. The lawmaker became the chairman of Hyundai Heavy Industries in 1987 but hasn’t participated in its management since 2002.