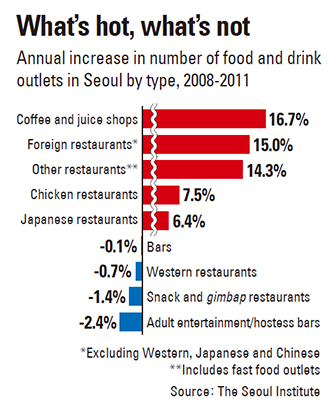 Coffee shops have become Seoul’s dominant places to hang out, and they’re even threatening the livelihoods of bars.

An analysis of data compiled by Statistics Korea shows that the number of coffee and juice stores in Seoul increased an average of 16.7 percent a year from 2008-11.

The Seoul Institute analyzed the statistics, and a report released yesterday said that while coffee shops were rising, the number of bars shrunk by an average of 0.1 percent annually. Adult entertainment bars catering exclusively to men, which include room salons or hostess bars, shrunk an average of 2.4 percent. According to the report, the total number of coffee and beverage businesses in 2011 was 9,399, which would be over 12,800 now if growth continued steadily. As anyone who works in a Korean office knows, it has become part of local culture to get a cup of coffee after lunch.

This is a major shift in public perception of coffee consumption. When Starbucks, one of the first coffee franchises in Korea, entered the market in 1998, a lot of people couldn’t comprehend the idea of buying a cup of coffee that costs as much as a meal. Fans of the expensive beverages were branded doenjangnyeo, or soybean-paste women, a pejorative sometimes used to criticize ostentatious consumption.

There were many skeptics of the success of branded coffee shops in the Korean market. But they didn’t count on the steady growth of enthusiasm among office workers and university students. The top five districts for numbers of coffee shops are either heavy with office buildings, such as the Gangnam and Jongno districts, or with universities, like Mapo District.

Mapo District is ranked third both in the number of cafes and its growth rate, implying that the market is still growing, even though it may look saturated to the naked eye.

As coffee shops continue to swell, other food and drink businesses are shrinking. Bars catering to naughty male office workers are in that category, as are less sleazy bars, western restaurants and snack and gimbap (seaweed rice roll) restaurants.

“Recently, stores that serve no alcohol are rapidly increasing, while bars are on the decline,” commented Park Hee-seok, head of the Seoul Economic Research Center of the Seoul Institute. “The change in the industries also reflects a shifting consumption pattern of people living in Seoul.”