Debt and a lost generation

Debt and a lost generation 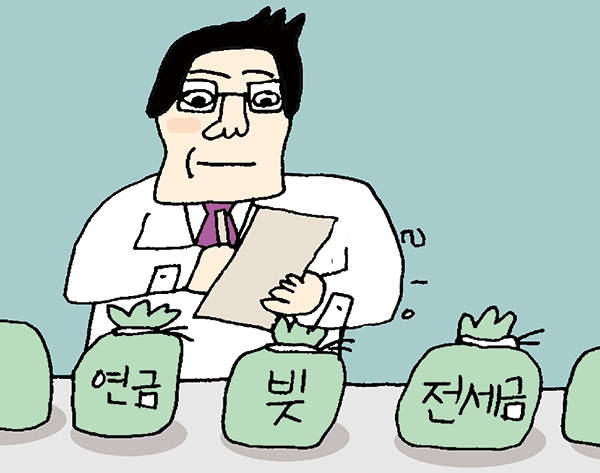 One of my college friends has always been peculiar. Although he graduated with a humanities degree, he got a banking job. He said he had a dream, which was to borrow millions, or billions if possible, and use them up and die without ever repaying them. I laughed at his joke. But then he suddenly turned dead serious. He had his own philosophy behind this bizarre so-called dream. “What is capitalism anyway?” he asked. “It breeds on credit. Credit builds when one borrows more. The credit could be limitless if one borrows and repays well. You will see. One day, everyone will live on debt. The day will come when the biggest beneficiary will be the one who manages debt well.”

He was right. South Korea’s household debt reached 1,021 trillion won ($955.27 billion) at the end of last year, according to the Bank of Korea. I still remember that conversation with him from the mid-1980s. He had declared, “Money in heaps can rock and change the world.”

How has our society changed with household debt exceeding 1,000 trillion won? A fellow researcher at the Korea Institute of Finance announced the beginning of an era of “debt-friendly generation.”

Today’s generation of a “credit culture” contrasts with their parents’. They are more accustomed to borrowing than saving. They have been born to a family already deep in debt. Considering consumer debt of 1,021 trillion won and national liabilities of at least 821 trillion won, a Korean citizen on average has 36.53 million won in debt.

The young generation prefers renting to owning a home. They cannot afford to buy a house in the first place. Their parents were lucky to inherit the houses of their parents, but since the house is the only asset they have, they cannot afford to sell it to provide homes for their children. They have to get by somehow with a longer life expectancy and little or no income. So the e-generation has to settle for monthly rent.

Also, the young generation entirely relies on monthly income because their indebtedness from the cradle stripped them of any opportunities to build assets. Most of their salary goes toward the cost of our live-on-credit culture. They also can’t give up today’s comforts for tomorrow’s security. Their lifestyles have become similar to Americans’ and most developed societies, where they are happy to use up whatever they earn to enjoy today, live in a comfortable home, drive a nice car and pay later.

The debt-friendly culture is irreversible. But should we just leave it as it is and watch the country slowly sink in a sea of debt? Shock therapy would be needed. First of all, the society’s mindset and attitude toward debt must change. The government, together with bankers, offers a variety of consumer loans to encourage them to buy new houses or rent in bigger or better neighborhoods at generous interest rates. Only a fool would pass them by. Naturally, mortgage loans increase. The idea of bolstering liquidity to help consumers buy homes cheaper is fundamentally wrong. For financial institutions, the whole credit-financed culture is nothing less than a boom. They hand out credit cards on the spot to anyone. A university student without any earnings can get a loan simply with a student identification card.

The KIF professor told me that when he studied in Canada, his bank denied him a credit card even when he solely traded with the bank. He finally was able to get with a limit of $5,000 only when he had that much in his bank account. He never missed a payment for four years, but his credit limit was increased to just $5,500.

It is not easy to discourage borrowing. Individual debt increases because the state does not offer sufficient social security. The economy digs into the pockets of consumers because there is not much money in government coffers. Politicians make matters worse. When the economy is slow, politicians and the government increase loans to give voters the illusion that they have more money in their hands, although they are actually deeper in debt. The credit card bust during President Roh Moo-hyun’s term is a local example. The bigger fallout was the easy mortgage loans during the Bush administration that led to Wall Street crash in 2008.

The best solution is a stronger economy that generates income and jobs. Still, we cannot sit around and do nothing until the economy picks up.

Irregardless, life will likely remain tough for the debt-financed generation.