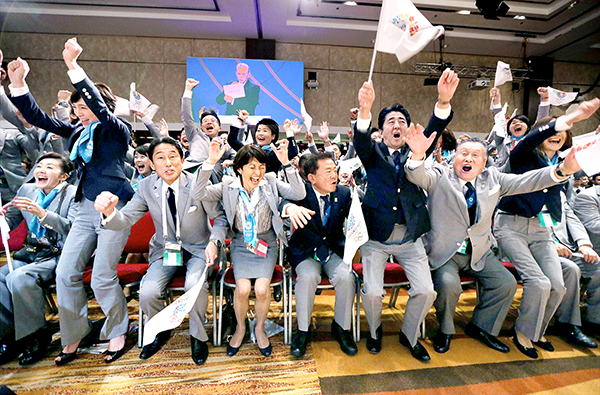 Japanese Prime Minister Shinzo Abe celebrates with members of the Tokyo bid committee as Jacques Rogge, president of the International Olympic Committee (IOC), announces Tokyo as the city to host the 2020 Summer Olympic Games in 2013.

As Japan bets on a big economic boost from the 2020 Olympics, it might be dismayed by Russia’s recent experience. Moody’s doubts the Sochi games will be much of a plus for that economy.

Yet there is one sector of Japan’s economy sure to profit handsomely from Tokyo 2020: mobsters. Tokyo won’t spend anywhere near the $50 billion some believe Vladimir Putin did turning a Black Sea town into a global tourist destination. More likely, preparations will involve around $4 billion to $5 billion of construction projects over the next six years. Regardless, where there are cement trucks, there are gangsters.

What worries yakuza expert Jake Adelstein isn’t the cash that organized-crime groups will be extorting below the radar screen. That’s a given in a nation in which gangsters operate legally, pass out business cards and enjoy lucrative relationships with government officials. Adelstein’s concern is how much of this dirty dealing will happen in relatively plain sight and on a very grand scale ahead of what he calls the “Yakuza Olympics.”

“The controversy doesn’t give the 2020 Tokyo Olympics quite the ‘clean and crime-free’ image that Prime Minister Shinzo Abe promised when luring the event to Japan,” Adelstein argues.

By some measures, corruption in Japan has worsened since 2011, when a devastating earthquake prompted one of modern history’s biggest reconstruction efforts. Back then, Japan’s ranking on Transparency International’s corruption perception index comprising 178 countries was 14 - just behind Germany. Japan was 18th in 2013. Why? A sudden explosion of huge construction projects, the kind often prone to graft, may offer a partial explanation.

Tokyo 2020 adds an entirely new dimension to the public-works boondoggle. A surge in yakuza activity could deaden any economic benefits Japan might have hoped to win from the games. Since the early 1990s, Japan has seen scores of road, dam, airport and sports-facility projects that have had little lasting impact on living standards, productivity or global-competition rankings. A resurgence of high-level graft would further complicate “Abenomics,” sapping any Games-related fiscal stimulus of its potency.

When the government has tried to sever the shadowy ties between organized crime and corporate Japan, the construction industry has always been the first target. As one Tokyo police source told Adelstein, the yakuza’s cut on construction projects is typically about 5 percent. But with friends in high places, insider information could raise that take exponentially as yakuza front companies bid on lucrative contracts and also scam any number of subcontracting deals that might allow for double billing.

Look, corruption is to the Olympics what Nike contracts are to athletes - there’s no way of avoiding either. But Japan could significantly raise the bar. Historically, Jeff Kingston wrote in his 2010 book “Contemporary Japan,” nothing enriches yakuza bosses like construction “given that during the 1990s the public-works budget was on par with the U.S. Pentagon’s budget and remains quite high despite huge cutbacks.”

Are boom times about to return for Japan’s organized crime groups? Clearly, they’re feeling under attack from many directions, including U.S. President Barack Obama’s moves to freeze assets and impose sanctions. It’s reasonable to expect aggressive attempts on their part to increase their construction take.

Japan’s public debt is already twice the size of the economy, and Tokyo will be borrowing more to pay for 2020. Even if Tokyo doesn’t approach Sochi’s price tag, you can bet the government will pay far, far more than it now estimates. The irony is all that borrowing and spending may do more to fill the yakuza’s coffers than the wallets of average Japanese.

Since the days of former Prime Minister Junichiro Koizumi (2001-6), the government has vowed to clamp down on the so-called nine-fingered economy. Tokyo 2020 will test that pledge over the next six years in an Olympian way.