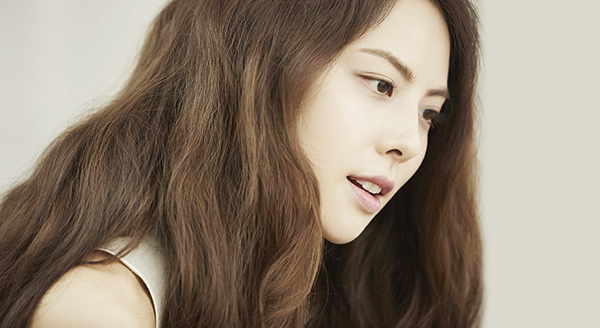 In the music video for Park Ji-yoon’s latest single, the retro-funk “Beep,” the singer dances like she has never danced before. In a video that cuts between Park and her friends dressed up disco-style and clips from a 1970s episode of the American TV show “Soul Train,” Park does what was once unthinkable - she smiles.

It seems that since Park joined her new agency, Mystic89, last year, she has attempted a lighter style that is brighter than the sultry, somber look that brought her fame in 2000 for “Coming of Age Ceremony.”

From “Mr. Lee” last October to “Beep,” Park is no longer the same woman.

The 32-year-old singer sat down with Ilgan Sports, an affiliate of the Korea JoongAng Daily, to talk about her path in life and music.

Q. Can you explain your recent release, “Beep”?

A. It’s a retro song. The word “beep” comes up several time during the song, and I think the eccentric sound goes well with the upbeat mode of the music. I wrote some of the lyrics and I wanted to reflect some of my bold and honest aspects into it.

You dance really energetically in the song. Were you trying to change your image?

I thought I needed a bright image because people identify me as a quiet, introverted person. Although it meant going a little overboard, I needed that positive energy.

Recently, the Korean music scene has been bursting with provocative, sexualized performances. As one of the pioneers of that style with your song “Coming of Age Ceremony,” how do you feel about this trend?

There are moments when sex appeal can be a useful tool for women, especially when we are on stage, and in that case it’s harmless. But I am worried about those who might feel uncomfortable enacting those risque moves.

What would you say if you could go back to your 20s?

I wouldn’t want that at all. I don’t want to go back to my uneasy, agitated youth. There were times when I felt thrills, but now that I have passed all those moments, I just want to enjoy being laid back.

How do you feel about moving to Mystic89?

From the bottom of my heart, I think I made a good choice. I told [Kim] Ye-rim last year, “I’ve been through various agencies, and you should really be thankful that Mystic89 is your first one,” and she agreed. The company really tries to preserve the unique flavor of each musician and interact with the public.

How did you feel when “Mr. Lee” was embroiled in the plagiarism controversy?

I felt sorry, but the fact that I consider Primary to be a talented music producer remains unchanged. Experiencing this kind of issue at his young age will help him make better music in the future.

Who do you consider to be your mentor?

As an artist, I like Lee So-ra. First of all, there are not many female artists who stay in the music scene for a long time. Also, I like her for having her distinctive style as an artist.

Do you plan to appear on any variety shows?

I am interested in “Hidden Singer.” I watched the first episode of the second season and I think I could do it well. But, on the other hand, I am not interested in programs where singers compete against each other. I think the whole rivalry structure ruins the minds of people.