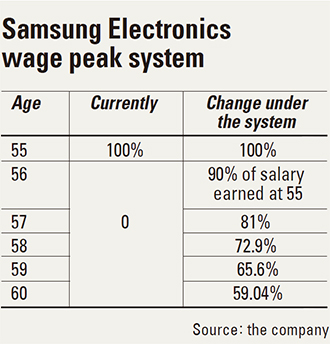 Samsung Electronics said yesterday it has decided to extend the retirement age for its employees by five years to 60, starting next week.

The move makes the tech giant among the first Korean companies to comply with a revised law passed by the National Assembly last year. Under the law, a Korean company with at least 300 employees must increase the retirement age to 60 from January 2016.

Samsung Electronics’ announcement is expected to be followed by similar moves from other Samsung Group affiliates. Samsung Everland, a de facto holding company of Samsung Group, said later yesterday it will implement the age extension next year. The decision by Samsung Electronics, the single largest Korean business, is also expected to cause a chain reaction at other major Korean companies. Samsung Electronics’ retirement extension comes in a package with the wage peak system, a move aimed at curbing a significant increase in labor costs. The company said it will reduce wages by 10 percent each year from the wage received at age 55, which puts the wage given at 60 years old at 60 percent of the salary given to a 55 year old. That means average wages received from 56 to 60 will be 70 percent of what a worker will receive at age 55.

“If we have to do it anyway, we decided to do it early, see the outcome and supplement the problems and manage the system smoothly by 2016,” said an official of Samsung Group.

During the presidential campaign in 2012, both candidates pledged to extend the retirement age to 60, and Samsung began to look at ways to reduce the potential negative impact of the retirement age extension. Samsung conducted a pilot project for the wage peak system at a factory of Cheil Industries, an affiliate, in Yeosu, South Jeolla, early last year.

“What we saw as the most important thing is that we don’t let the lifetime salary given to an employee rise too significantly, but at the same time don’t let it make too big of an impact on their lives,” said an official of Samsung Group.

The company said the wage peak system will increase the lifetime wages of an employee by 25 percent from current levels. Consideration for those who turn 55 and 56 this year who would not have enjoyed the wage peak system under the current law was another reason for Samsung’s early adoption of the system, according to its officials. The retirement age expansion, together with the Supreme Court’s decision late last year to extend the scope of base salary, is likely to add to companies’ costs.