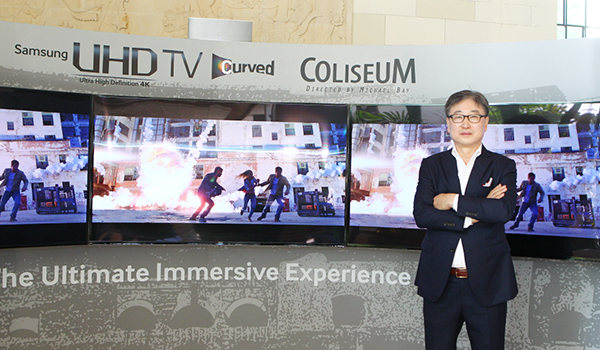 With dim prospects for sustained smartphone sales globally, Samsung Electronics is pinning its hopes on China.

At the Samsung Forum in Bali, Indonesia, the company said it will bolster its presence in the world’s most populous country this year with innovative products for the home.

“We will expand our sales base of curved UHD TV,” said Park Jae-soon, executive vice president of Samsung Electronics in Greater China, during the forum.

“We will open the era of curved TV in China and also will be active in supplying tailored UHD content along with Chinese companies,” Park said.

TV is part of a package of products with which Samsung is determined to compete in China. Next month, Samsung plans to begin a gradual global release of the latest innovations showcased during the Mobile World Congress - a curved UHD TV, the Galaxy S5, Samsung Gear 2 and Samsung Gear Fit. Samsung will provide a “totally different mobile experience” to Chinese customers with those products, Park said.

The company also plans to start providing a Samsung Smart Home service in China in the first half of the year.

Samsung, which enjoyed 80 percent sales growth of its products in China last year, expressed confidence about its future in the world’s largest consumer market.

Yoon Boo-keun, president of the company’s consumer electronics division, stressed Samsung’s efforts to produce innovative products in China with the help of nearly 60,000 Samsung employees in the country.

Samsung’s growing interest in China comes after its record-breaking rally lost ground in the fourth quarter when its operating profit declined 6 percent year-on-year to 8.3 trillion won ($7.7 billion). Revenue of the IT and mobile division, which handles Samsung’s smartphone business and produces around 60 percent of the company’s profit, dwindled 18 percent from the third quarter to 5.47 trillion won.

A turnaround is unlikely to come soon. According to market research firm IDC on Wednesday, global smartphone shipments will grow 19.3 percent this year, compared to 39.2 percent last year, with the pace of growth continuing to fall through 2018.

Samsung retained its No. 1 position in China’s smartphone market with a share of 19 percent in the fourth quarter, according to IDC. But it is being chased by Chinese companies Lenovo, Coolpad and Huawei, all of which have shares of 10 percent or more.

One reason for Samsung’s optimism in China is Beijing’s approval in December of the long-term evolution, or 4G, service.

“Based on our experience and the technology we have acquired in the global long-term evolution market, we will lead the 4G market in China that is expected to grow significantly this year,” Park said.