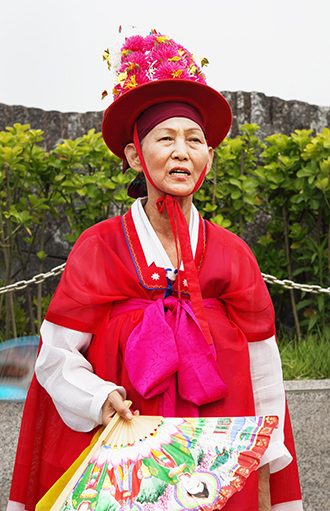 With just a week until “Manshin” opens in theaters, the shaman behind the biopic documentary, Kim Keum-hwa, talked about the significance of the film.

Q. Are you nervous at the prospect of having the public watch your life in theaters?

A. I wouldn’t say nervous, but I hope that a lot of people take an interest and watch the film. I hope people will get a better understanding of the traditional practice of gut [traditional Korean exorcism] and also about Kim Keum-hwa.

Is there a message you want to send out to the people through your story?

I want to explain to modern-day people how a gut used to be and how precious it was to our elders, and what an invaluable part of our way of life it used to be. Because of its misuse by some, it has been tarnished.

Gut is fundamentally a celebration and a ceremony to bring people together in unity; and within it there are various theatrical and ritualistic elements.

What does it mean for you to be recognized as an Important Intangible Cultural Property?

An Intangible Cultural Asset is both an acknowledgement of and encouragement for a customary practice that’s the root of a culture.

It means we have to foster the growth of our spiritual culture and the practice of gut without changing it.

In the film, one of the most human sides of you that we saw was when you let your second husband go. Did you have any regrets about letting him go?

I wanted to hold onto him desperately and begged and pleaded with him to stay, but because of who I was [a shaman], there was no other way.

I came to realize that there’s no point in holding onto someone whose heart had already left me.

As a result, he was free and I became a preserver of gut culture, so I have only him to thank for that.

When was the last time you wished to be a normal person?

I was 36 or 37 when the Saemaul Movement began, and anything that hinted at superstition was frowned upon. I was persecuted day and night.

I detested that I couldn’t be a normal housewife, raising a family that loves me. I loathed my fate for that.

As I encountered one obstacle after another and saw how happy other people were, I was envious. Then I told myself off for coveting things that weren’t mine. My path was clearly in front of me, and I made up my mind to live it the best I could. After 40, I stopped envying the lives of others.

The moment in the movie when you encounter Christianity for the first time is very vivid.

I never encountered Christianity in North Korea, but came across it in the South just a little after I settled here. They told me to believe in God and to come to church, but I wasn’t interested.

I guess it’s because in the ’70s and ’80s they didn’t know better, but I noticed that churchgoers were extremely selfish, self-righteous and quick to put down other religions. I remember encountering them at a mountain while I was there for a gut and thinking, “They are degrading their Lord all by themselves.”

Then in the ’90s and 2000s, I started speaking at Catholic universities and forming alliances with students and nuns. Consequently, more people became aware of gut.

When you were young, your ability to see things in the future and speaking of those things to others led to you being ostracized.

When I was young, I surprised myself as I heard from the gods. So I didn’t restrain myself and said it all. As I grew older and came to know the world more, I realized that wouldn’t do.

What is the reason that so many spirits still roam, remaining in this world?

The spirits that weren’t able to live a natural life span or met an untimely or unfair death are unable to leave. They are unable to find a path that leads them to a better world.

People look to fortune-tellers to see if they can change the outcome of their future. Do you believe we can control our destiny?

It’s possible if you try hard and live right. You can’t change everything but with a certain number of tries, certain things can change.

As a shaman, you said you wanted to heal people in all ways. In what area do you think people need healing?

Healing of the mind, that’s the best medicine. You have to let go of envy because envy begets anger. You have to be able to look back calmly and reflect and be healed.

As a shaman, what I want to do most is to help those who need healing.