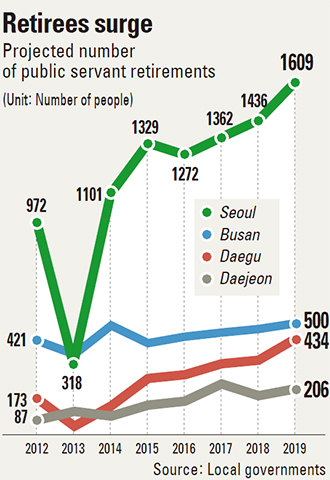 For Hong Seung-hwal, a 59-year-old public servant who works as a director in the public administration and security division of the Daegu city government, 2014 is likely the end of his professional life.

Having been born in 1955, at the start of Korea’s baby boom generation, Hong began his service in 1975 at a county office in North Gyeongsang.

In June, he is expected to undertake a training session to help soon-to-be retirees learn new skills and adapt to a new life after retirement.

Hong is hardly the only one. As many public servants born during the postwar baby boom period, from the mid-1950s to the early 1960s, are reaching their retirement age, many city offices have recently seen the number of retirees drastically increase.

City and central governments went on a massive hiring spree in the 1970s and 1980s, in a push to transform the war-torn country into an advanced, modern nation and meet the needs of the country’s growing population.

For example, Daegu established six district offices in 1981, in response to its surging population. That expansion caused the number of Daegu’s civil servants to spike to 5,400 that year, up from 3,700 the previous year.

Some are voicing concerns that the rapid exodus of experienced workers could leave a vacuum that younger and entry-level officials cannot fill.

That vacuum in high-ranking positions could also trigger intense competition for promotions among senior workers.

“It should carefully decide the number of new recruits it needs rather than trying to replace retirees with the same number. In other words, it would be better to hire as few as possible.”

He added that local governments should mull rehiring their retirees as contract workers, to give them an opportunity to share their knowledge and experience with others. “That’s the efficient use of resources,” Kim said.

But it appears that governments prefer to hire more new recruits, which is good news for young people looking to work in the civil service. Seoul plans to recruit 70 percent more lower-level workers this year, while Daegu will nearly double the number of hires to 598, up from 313 last year.

“We’d like to hire more civil servants, because current workers are retiring in droves,” said Lee Jeong-gu, an official at the Ministry of Security and Public Administration.

He also cited the growing demand for welfare programs.

“In addition to that, we expect the number of recruits to keep increasing because we need more workers to administer our welfare policies.”