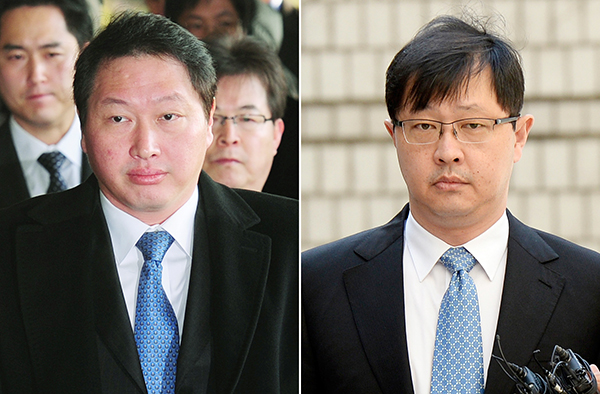 The Supreme Court yesterday confirmed a four-year prison sentence for Chey Tae-won, the 54-year-old chairman of SK Group, the country’s third-largest conglomerate, who was convicted of embezzling corporate funds for personal gain.

Chey was convicted by a lower court of embezzling 45.1 billion won ($42.2 million) in company assets from two SK affiliates for personal investments in stock futures and options in 2008. He has been imprisoned since January 2013, when he was found guilty by a lower court and taken directly to prison from the courtroom.

In the same ruling, the country’s highest court also upheld a three-year and six-month jail term for Chey Jae-won, the chairman’s younger brother and the vice chairman of SK Group, for collusion.

The 51-year-old vice chairman was initially acquitted of the charge in a lower court in January last year but was found guilty of conspiring with Tae-won to embezzle corporate funds in an appellate court in September. He was also sent straight to prison.

“It is judged that the lower court’s decision, which found Chey Tae-won and Chey Jae-won guilty of embezzlement and collusion, was a reasonable one,” the country’s highest court said yesterday.

Excluding the possibility of an early release, the jailed chairman could sit in prison until January 2017, while Chey Jae-won’s term ends in March the same year.

The court’s ruling yesterday drew wide attention, as it remained to be seen whether the judiciary would continue its tough stance against chief executives, notably the owners of family conglomerates, who have broken the law. Many chaebol heads have been handed harsh sentences in recent months for white collar crimes that the courts had traditionally treated lightly, in what many view as part of the “economic democratization” pledge from the 2012 presidential election.

SK Group had hoped for lighter sentences, especially considering that Hanwha Group Chairman Kim Seung-youn and LIG Chairman Koo Cha-won were both released from prison earlier this month after receiving softer punishments from an appellate court after being found guilty of embezzlement and breach of trust.

The two both received three-year prison terms, which were suspended for five years. The court signaled that it will continue to play hard ball with business moguls breaking laws, however, when it handed down a four-year sentence on Feb. 14 to CJ Chairman Lee Jay-hyun on charges that he misappropriated nearly 166 billion won in company assets and evaded taxes. Lee appealed the ruling.

With the final rulings fixing the sentence terms, SK Group will have to steer its management for years to come amid economic uncertainties with two of its top decision-makers absent.

Reflecting on the severity of final verdicts, SK Group yesterday issued a statement regretting the court’s decision. “We are deeply saddened over the court’s ruling yesterday, despite our strident efforts to make our case in court,” it said.

The conglomerate said executives from SK affiliates all expressed concerns during an emergency meeting held yesterday over the course of new projects and investments undertaken in recent years.

But its officials have vowed “to overcome challenges in a firm unity and become a business group worthy of trust,” SK Group added.