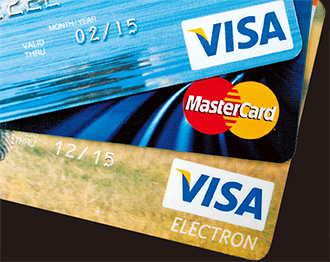 Last year, Koreans charged more than $10 billion on their credit cards overseas for the first time ever.

According to the Bank of Korea, Koreans spent in excess of $10.5 billion on goods and services using credit cards, an increase of nearly 12 percent from the previous record of $9.4 billion in 2012.

“We believe credit card spending has increased because the number of people traveling abroad has gone up as well,” said a BOK official.

The number of Koreans traveling abroad fell sharply by 10 percent in 2008 at the start of the global financial crisis, then more than doubled to a nearly 21 percent decrease in 2009.

Although it rebounded some in 2010 on the back of better-than-expected economic growth of 6.3 percent, it quickly fell in 2011 as the crisis in the euro zone once again clouded growing optimism about an economic recovery.

Meanwhile, credit card spending by foreign visitors to Korea has increased because more people outside of the country have been stopping by the peninsula.

Last year, foreigners spent $5 billion, which is a 4.6 percent increase from the previous year. The number of visitors grew by 9.3 percent year-on-year to 12 million. 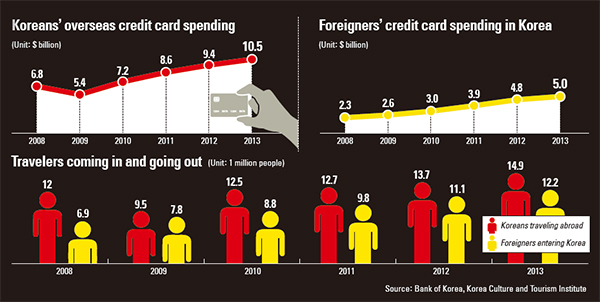 However, unlike the increase in Koreans traveling abroad, growth in the number of foreigners visiting Korea - as well as their spending - has been slowing.

The number of people traveling to Korea has continued to grow, but at a slower rate than the 13.7 percent reported in 2012.

Since increasing nearly 7 percent in 2008, there has been double-digit annual growth in the number of visitors coming to Korea.

“The persistent conflict with Japan might have had an impact on reduced credit card spending,” said the BOK official.

“However, each country has different spending preferences, and there are many that prefer cash payments.”